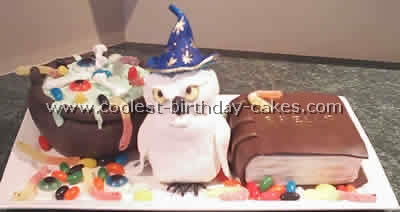 I had to come up with an idea for a cake that had something to do with Harry Potter but not actually have Harry Potter in it. I baked a chocolate cake in a pudding steamer bowl for the cauldron and covered it with chocolate fondant, then put worms and eyes in it that I bought at the local lolly shop. I made the bones out of white fondant.

The spell book was also chocolate cake. I used chocolate fondant for the cover and white fondant for the pages. I wrote spells on it with edible gold paint and also brushed some gold on the pages. The owl I made using fruit cake. I carved the basic shape of an owl then covered it in white fondant. For the wings I used a large leaf shaped cookie cutter and a smaller leaf cutter to do the icing on the face. The hat was also made out of fondant. I scoured the icing all over with a knife to make it look like feathers.

It was quite simple to make. You just need a good imagination to think up the ideas for kid birthday cakes.

My husband’s grandfather was celebrating his 83rd birthday and I was asked to make the cake. I was not given any ideas, suggestions or guidelines but I knew he had always been fascinated with magic. I did a query on this site for kid birthday cakes and for magic-type cake. I found this cake. However I did not have the cookie cutter it called for so I had to make a few adjustments.

I used the largest bunny cookie cutter I had following the web instructions. Next I made the playing cards out of fondant. I rolled the fondant as thin as I could possibly roll it, greased up an old playing card, set it directly on the fondant and traced it with a pizza cutter.

I did this several times to make sure I was going to have enough. Once the fondant dried I placed it on top of the cards I was wanting and just traced them with edible food markers. The cookie and cards were then adhered to cookie sticks using royal icing.

The wand and handkerchief were formed with colored fondant. To make the gloves I rolled out some white fondant, placed my hand on it and traced it lightly with a tooth pick then I used a paring knife to cut it out completely. The coins are the chocolate foil wrapped ones that you can buy nearly anywhere. And finally the dove was purchased at a local hobby store Hobby Lobby in their wedding department. It was “glued” to the wand again with royal icing.

So in all everything on the cake was edible with the exception on the dove and the rim of the hat. And thanks to this site for kid birthday cakes.

A friend of mine at work needed a cake for her 9-year-old daughter and wanted something special. So I came up with the rabbit in the hat cake. I made three 8-inch round cakes and one 10-inch round. The three 8-inch is the hat and the 10–inch cake is the brim.

I then made the rabbit out of a 3D rabbit pan I have and cut off the bottom. I put the 8’s together and icing them like you would any layer cake; then the 10 and then put a dowel through the bunny into the cake. I used a star tip to do the bunny. They were very thrilled with the finished product. Kid birthday cakes are fun to make!

Here’s a birthday cake for my 11 year old daughter. My 3D kid birthday cakes are created from cake, cookies and candies – 100% edible.

Magic Book: triple slab of cake, whipping cream between the slabs. The leather look corners were made from slices of licorice squares and licorice string. Rivits are silver ball candies. The key is a pretzel dipped in melted white chocolate.

As with all my kid birthday cakes, I like to achieve a realistic look. This cake took approx. 4 hours to create (not including designing the cake and baking the cakes).

The looks on the kids (and adults) faces is priceless!

What a magical cake it was!

(Editor’s Note: This is one of those kid birthday cakes that can be used for a bunch of themes. It was originally made for Halloween as a Witch’s hat. I decided to add it to this section as it also resembles a Wizard’s hat. Any way you decide, it’s a really cool cake!)

I baked one box recipe using two nine inch round baking pans. One to use as the brim base and one cut approx. 6 inches in diameter and placed on top in the center of the 9 inch round cake. (Save the remaining pieces of cake.)

Then I baked one box recipe in a dome baking dish (pampered chef glass mixing/baking bowl). I inverted the bowl cake on the 6 inch. cake and then using a pointed sugar cone (ice cream sugar cone) and a cake dowel I made the top pointed. I stuffed the sugar cone with left over cake for stability and snipped the end enough to fit a small cake dowel through the center and then down through the center of the entire cake to hold everything in place.

(I used two red velvet cake recipes to make the Witch’s Hat red inside in order to add to the creepy effect of cutting into it and it looking blood red.)

For these type of kid birthday cakes you can decorate as you wish. I first made paper cutouts for the star and moon and pinned to the cake and decorated around them with black icing. Then I filled them in with yellow icing and green for the brim trim.

It was snatched up quickly at my daughter’s school fall festival, but looked too good to cut into.

Read Kim’s “Party-Tale”: The story behind the cake…