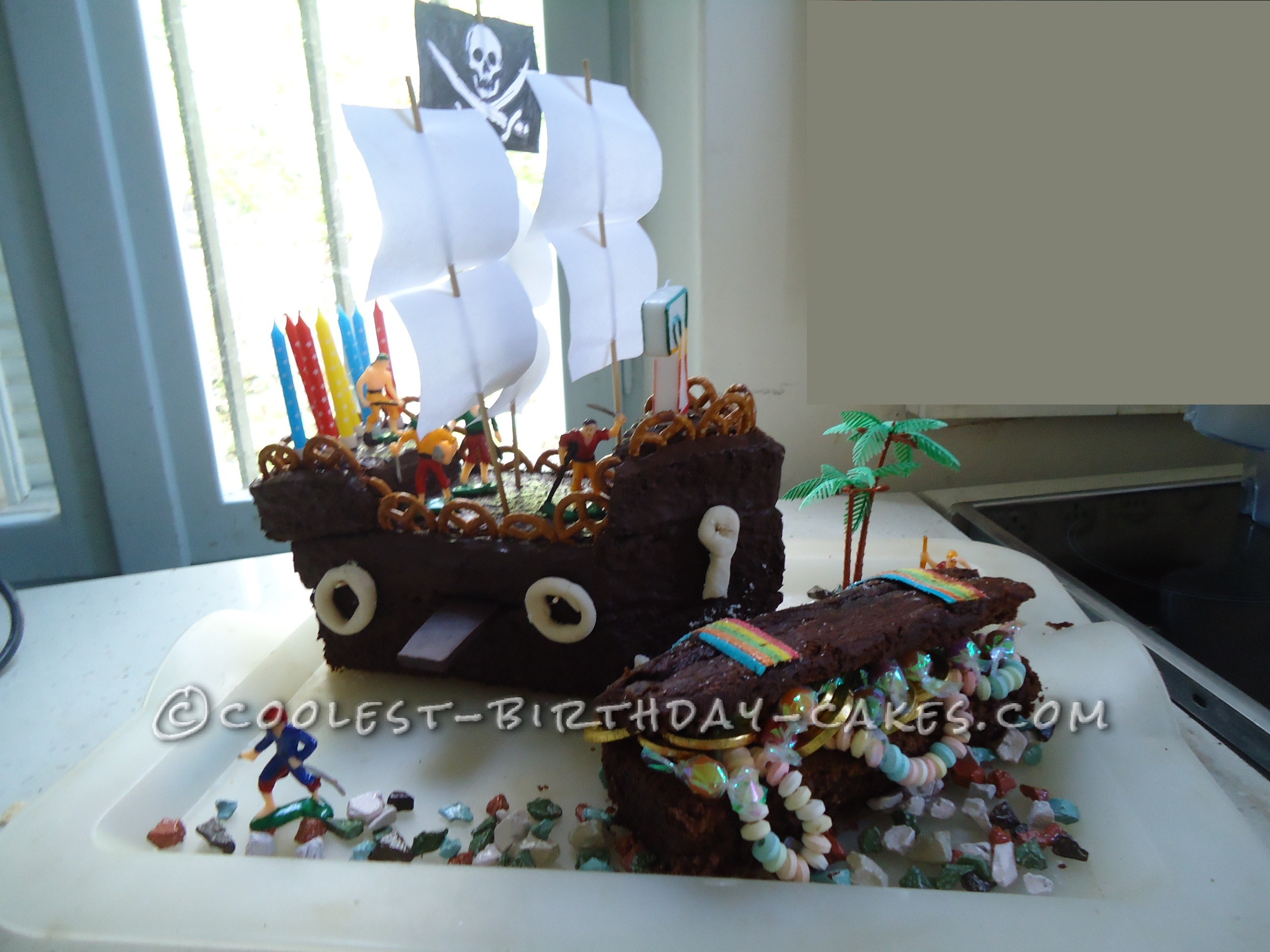 Several years ago I bought  Australian Women’s Weekly Kid’s Birthday Cakes book. When my son was 5 he chose a pirate ship  from that book . Since then I made this cake 6 times. Three times for my son, including latest one two weeks ago (on the picture ), 2 for his cousin and one for his best friend.

This cake is very impressive yet very simple to make, the most work is in  icing. Sails and pirate flag are making the effect. I copied a pirate flag by hand from the book ( but it turned out  that such a kind of flag can be downloaded for free from the web and simply printed…). Believe or not, I used  the same flag for all 6 pirate ship cakes I made. I kept it from birthday to birthday.

I cut additional 8 rectangle pieces  from printing  paper sheet, and skewed them (3 pcs  on each skewer ) on 3 skewers to make sails for the ship. Funny thing this year was that the book was lost  and I considered other options, so I started to  think that a treasure chest would be a good cake as well, and I stared looking for ideas on internet. In the end, the book was found at my sister in law’s home, but too late, I already decided to make a ship without the book.

Anyhow idea of treasure chest intrigued me and challenged me, so, since my son has already seen this ship cake several times, I decided to add to it a small treasure chest as well, and so to make a surprise again.

For the ship I  improvised  a simple chocolate cake recipe and baked in rectangular baking mold. After baking the cake I cut it in half length ways and then cut a quarter of the length width ways. I put  two longer pieces one on top of other. I placed  one of the smaller pieces on one end, held in place with a skewer and cut at angle and I placed  another piece at the other end. This piece had to jut out slightly at the back and all 3 layers were held together with 2 skewers.

And then I iced it with chocolate (dark chocolate melted in microwave with a bit of  oil to keep it liquid till the end of icing ). I put a piece of chocolate between layers of cake for board  (day  before, I made  floats and anchors from sugar dough and let them dry , but anchor was broken at the moment of cake decoration).

Then I cut with knife the line  where  the other decoration was to be positioned, to make it easy to stack them in ( improvement just in this last cake, I used before to stack directly into cake which took twice more time). I needed to put sails pretty close to each other, not to get burned by birthday candles. I hung floats and (broken ) anchors on toothpicks. And that’s all, I put  some pirate figures for additional effect .

Treasure chest was extra simple. In the end I gave up baking again. I bought ready made chocolate cake, cut the edges to fit the space, cut the top of cake, I made  with a knife, a (not too big) hole in cake and I stuck on cut top candy straps ( with the rest of chocolate after icing the ship ) .

Just before the presentation (since otherwise chest would have fallen apart),  I  simply filled it with chocolate coins, candy chains and glittering small sweets. I actually really enjoyed choosing and buying “ the treasure “. Candy chains half fallen from the chest made special effect of richness. I spread some chocolate gravel for better effect (actually, not necessary at all, but my son was very pleased since they were very tasty). The effect: just incredible!!!

For my son’s 5th birthday, (my first pirate ship) the expression on his face, first, open mouth and then big joy and happiness, were worth  all the effort.

(BTW, when I made this same cake for the first time  to his 7 year old cousin, boy did not allow us to cut a cake, he realized what is going on and stopped us after the ship was cut in two and one big slice was cut out. I re assembled (now a bit shorter ) ship, and he stayed for long time, just watching it, and than agreed to have it sliced. It just made my day.

Last year for my son’s 6th birthday I brought the cake  to birthday party in  kindergarten (daily care). My son was impressed again like he never have seen that cake before . I remember that  collective moan  “ wow ” of all the kids  made me feel the proudest mother and cake baker on the world. I’ll never forget  that feeling. It let me understand what celebrities may feel.

So this year for his 7th birthday, I already know that this pirate ship cake is a big hit, but I  did not expect such a reaction (kids from school class  haven’t seen that ship before ,but  they were one year older , and especially my son that has seen this ship already pretty  enough… )

For some reason,  combination of pirate  ship and treasure chest + candles made an extraordinary effect on all the children (boys and girls the same), my son  on the first place. Something in ship & treasure chest simply hypnotized them, first they came close to see better (I was hardly able to move trough the room in order to place a cake on the table ), then they stayed motionless looking at the cake  and then  they exploded  and started reaching for  glittering sweets  like they haven’t seen candy in their life!!

It was pretty hard to calm them down and to let  each kid  have a proper share. I certainly haven’t expected such a reaction! Next year I’ll make something else.