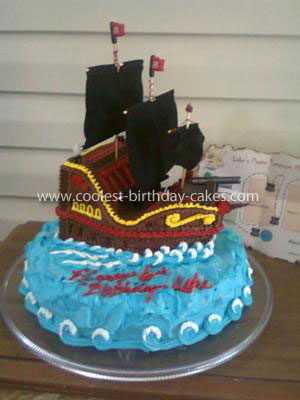 This Coolest Ever Pirate Ship Birthday Cake I made was for my son’s 6th birthday party, June 30, 2011. The party theme was pirates so I had to do a pirate ship! There was no mold used…everything was sculpted, read on.

The bottom layer was strawberry cake that was baked in a 14″ round 3-inch deep pan. Since it takes longer to bake in deeper pans, I used a shallow baking sheet on the bottom rack in the oven and fill it with water and also wrap the sides of the pan with very wet old towel strips. This prevents the sides from becoming over baked while the center of the cake is finishing, plus it allows the cake to be very moist from the center all the way to the sides.

The ship was sculpted out of a 9 x 13-inch layer of chocolate velvet cake. I love this recipe because it is a very dense, almost brownie like, texture that is much easier to sculpt than “fluffy” cake. After cooling completely, I cut the 9 x 13 cake in half, added a layer of icing and stacked the second layer. Using a bread knife, I cut out a section (the lowest part of the cake you see in the photo) then stacked it on top of the back of the ship. I trimmed the front of the cake into a “V” shape. Then I carved out the under part of the front of the ship to add extra shape to the front. I smoothed out the sides with chocolate buttercream icing.

Note: the ship was put on a plastic corrugated cake board and I used an exact-o knife to cut the board down to exact size before transferring this cake to the top of the round bottom layer. Before transferring this cake over to the bottom strawberry layer, I iced the bottom layer with two different shades of blue along with a little white butter cream icing using whispy strokes to create the illusion of water. The same two shades of blue were used in a simple c border along the edge. I topped each c wave with a crest of white icing.

After the bottom layer was iced, I stacked the basic ship cake on. I supported the weight of the ship with wooden dowels inserted into the bottom strawberry layer. I used various tips to decorate up the sides and top of the ship, using chocolate buttercream icing, white buttercream icing tinted yellow and red. The front tip of the ship is simply a toothpick inserted into the front, then use a medium star tip over the toothpick while pulling it out while squeezing your decorating bag so it covers the toothpick.

After piping what I wanted on the ship, I covered the edges of the cake board under the ship with blue waves, similar to how I did the border around the bottom of the strawberry layer. I added a little piping to simulate currents of water, added a small pit of clear piping gel, and a little bit of clear edible glitter to add a little sparkle to the water. (The piping gel and edible glitter you can also find at a hobby, craft, or local cake decorating supply store.)

I found awesome little pirate candles at a hobby store, along with a small cannon. I bought a small scrap of black fabric, cut out jagged edges and sewed the sails of the ship. I used picture ideas I found off the internet for the sails. I’ve been sewing since I was 7, so for me, it was easy to figure out. The poles of the sails are barbecue skewers that I looped together with red crochet string. If this step sounds too complicated, find a friend who sews! I almost used black netting, since I saw a picture on the internet of a prom backdrop with white netting that looked awesome, but I was afraid it wouldn’t give me the drape I wanted on such a small scale.

The candles were red flags (that you can see at the top of the sails that I tied to the skewer), treasure chests, swords, and pirate skulls.

I hope this helps other inspiring cake decorators. I’ve done cake decorating as a hobby, also, since I was 7, and I’m 38 now. It just takes practice and patience to learn. My mom taught me the basics when I was little and I’ve just taken it from there. I do not own a business, this is just something I love to do for family and friends.

My son was so thrilled with this cake, as were all our party guests! My husband asked why I do such detailed cakes for our kids, my son said, “My pirate ship cake is awesome! You totally read my mind! Mommy, you’re the best cake decorator and the best mommy ever!”. I simply stated to my husband, “That’s why I go to all this “for my kids” and the forever memories this creates! 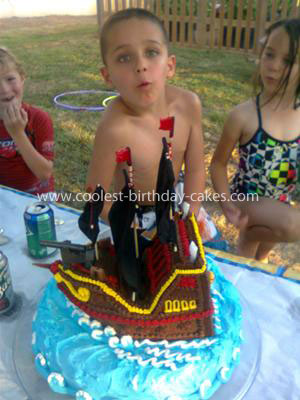