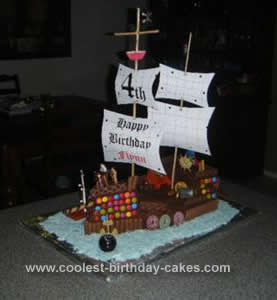 The Homemade Pirate Ship Birthday Cake – EASIER THAN YOU THINK! Start with 2 square slabs. One will be 3/4 base of the ship and the other one needs to be cut 1/3 off to put on top of the first cake to form the back of the ship. Next cut the remainder of that cake into 3 triangles. The middle triangle will form the front of the cake and the two smaller triangles need to be inverted and placed on top of that piece to form the bough to make the shape of the ship!

Now the fun part, just start icing with a very thick butter icing or a store bought frosting and cocoa, melted chocolate or Parisian browning essence to gain desired colour! Frost until all the ship is covered. Now add all the pieces to make it the coolest ship ever!

We found “twirly whirlys” to make the ships fencing and malt sticks to line the base of the ship, fruit rings for the port holes and one cut up for an anchor with a tooth pick through it and one for the wheel, smarties to decorate, maltesers for cannon balls, chocolate coins for treasure and a treasure box. Let your imagination run wild. We found figurines in the $2 shop and made a raft surrounded by coloured coconut on a foil lined cutting board and a biscuit wafer at the front of the ship.

We printed out sails with my son’s name on it and used skewers to hang them. Patty cake papers on the sails look good too with pirate flags on the top. We even named the cake and placed it on the back! Don’t forget a thin chocolate bar for the plank!

Good Luck and have fun! 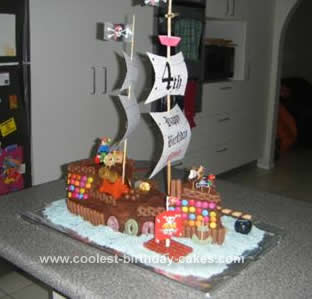 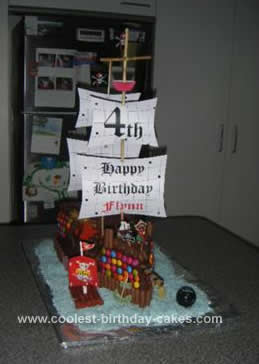 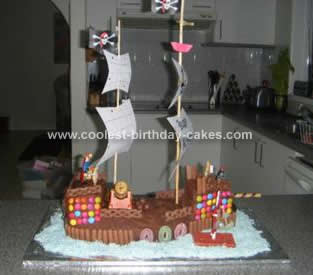