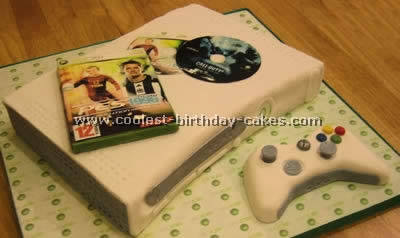 This cake was made based on a 9 x 13″ sponge cake. I got the birthday cake ideas for kids from this site. I cut the shape as near as possible to an actual Xbox and covered it in rolled icing. I added a few buttons etc on the front to make it look real and I imprinted holes on the side to look like the grill.

The control was made out of pure icing just mixed to the colors needed. The game case and discs are edible; they are printed on icing sheets and simply placed on the cake. Before the case for the game was printed I made a rectangle shape out of icing to wrap the game cover around – very realistic!

I got my idea from birthday cake ideas for kids on this web site. My son just turned 18 and I wanted to do something really special. The game console was the easiest. Just two layered cakes with buttercream and plain white fondant. I used coloring to get the grey sides and buttons and just poked holes for an authentic look.

The buttons for the guitar were prepared days in advance so they would stiffen. I used fondant with black coloring. I laid two cakes side by side and used a poster board to get the exact shape.

Birthday cake ideas for kid by Randi O., Squamish, BC

Just follow the Duncan Hines/Betty Crocker cake mix. I used a loaf pan as well as a 9×9 square cake pan and only poured a small amount of batter in each (approx 1/2″). When they were done I removed them from the pans. the 9×9 cake was cut into three (remotes) and the loaf pan size was cut down to size to make the fourth remote. Let them cool then decorate to look like the Wii Remote. I made them about the same size as the remote.

I used M&M’s (red and blue) for the “Power” button and the “start” button. I just added extra icing for the other buttons and added food coloring to enhance the controls. For the black dots where the speaker is I just dipped a toothpick in black food paste and “dotted” in on. I made four remotes so at the bottom of each I added blue icing for the player number. To get the perfect circles for the buttons I used a syringe with no needle, it works the best!

Thanks for all the cool birthday cake ideas for kids on this site!

I made this cake for my father’s birthday. He is a huge Xbox fan. I am not a pro but I got birthday cake ideas for kids from this site and made this cake for a grown up. I am a stay at home mom of five. I started out by baking three pound cakes in an 8in.square pan. Cooled them in fridge and then froze them for easier carving. I cut one of the cakes in half and laid on its side to make the box itself. Put other half in freezer for later use. You shall see in photo.

I leveled cakes and frosted with buttercream. I also added two dowels so side cake would stay put. When cake was cooled I carved out the shape (the x etc). Once that was done I iced it and put in fridge. I made my own fondant and tinted it black using color gels from Michales which really comes out grayer.

Once fondant was done I took cake out of fridge and laid fondant over cake and shaped it. I carved the lines with fondant tools and I also used toothpicks. They really come in handy. I tried to work fast before fondant starts to dry.

Once shaping was done I used Wiltons Spray food coloring. This is great stuff if you are like me and don’t own a airbrush machine. I let that dry overnight. After I was done I rolled out a little more of the fondant (not colored) (put some aside for other details). I dyed it a greenish yellow color.

I started out with yellow and added green. I cut out a circle for the middle of cake. I then carved out xbox on it and attached to cake. For the controller I cut out the shape from other half of pound cake put fondant over it and carved details out of it. I then sprayed it like I did cake. I also used some fondant for details and painted it with food color gels and a little almond extract. For the wire I rolled out some fondant and shaped it like a wire, attached it to cake with toothpicks at ends. I then painted it with food color gels.

If you can carve well then this cake is really not that hard. It was so worth the lack of sleep. I really loved the results. Hope this will also give you birthday cake ideas for kids!

Birthday cake ideas for kid by Robin W., Anderson, IN

My oldest son is into Mario and Luigi big time. Not just the games, he loves the cartoons too. I got the birthday cake ideas for kids when I saw an old game cube system in the closet. I used three 9×9 cake pans to make the game cube and used a full sheet cake for the base.

The controller is also a cake. I made the cake pan for the controller by hand using foil and cardboard. All of the buttons are pieces of candy. The wire is black rope candy and the strap on the back is an airhead. This was the funniest and yet the toughest cake I have made yet. I am always my toughest critic but the huge smile on my son’s face told me that it was by far the best cake I have made.

Birthday cake ideas for kid by Lucy A., Grand Prairie

Thanks to birthday cake ideas for kids on this website where one can find endless ideas for cakes!

I got this idea from this site for birthday cake ideas for kids. Someone made a Play station cake. My son has an X-Box and it didn’t take much to alter it. I just made a cake in a 9×13 pan (A two layer cake would’ve been better though). I cut the controller from a loaf pan cake. I used a thin layer of buttercream frosting on the cakes. Then I covered them with black fondant.

The controller wire is also fondant. I used a knife to score the designs on the cake. I used a small circle cookie cutter to cutout pieces of fondant for the controller. I shaped the ones for the joysticks and I attached the pieces with a dab of water. The colored parts are icing. Everyone loved it.

I made a Play Station 2 cake for my son’s 10th birthday. I always try to come up with birthday cake ideas for kids that represent what they are into that year.

I made a 9×13 cake and lightly frosted it with icing. I then colored white fondant black and rolled it out to cover the cake. I put some fondant to the side once it was gray to make the cord and controller. The controller is made entirely out of fondant.

I cut the various buttons out of the gray and used tinted frosting colors to make the small shapes. I made the shapes by dipping a tooth pick into the tinted icing. It was easier than trying to pipe onto such a small surface. We added some of my son’s games as decoration. My son (and our whole family) loved the cake!

This was for a friend’s 20th birthday reminding him he’s not too old to be a kid. We had crayons, coloring books, video games and play dough. It was awesome.

For the cake I searched your site and found this birthday cake ideas for kids. I used a Duncan Hines French Vanilla mix. Duncan Hines works so great. There is never a question of the taste or consistency. I used an 11 x 15 pan. After it cooled to room temperature, I then froze the cake. Freezing them helps in the carving process (less crumbling)

Once frozen I cut the shape out iced with butter crème icing then covered in marshmallow fondant. The fondant doesn’t have much of a taste but if you put the right amount of frosting underneath it’s not too bad. When using fondant less is more. It doesn’t have to be super thick to be super smooth. I added Black food coloring to a little of the fondant to shape the buttons with. These were glued down using the butter crème icing.

Colored icing and Wilton writing gels were used to make the writing and more buttons. Sitting beside the buttons are two little people. I made them using fondant and painted them up with Wilton icing colors. I used a clay mold to make these and was very pleased with the outcome. I secured them with a toothpick to make them sit up on the cake. It was a definite hit at the party!

This is one of the simpler homemade cake recipes. It was created for a 14 year-old boy who’s favorite pastime is playing games on his Playstation2. He was so thrilled about this cake!

In creating this Playstation2 console cake, I baked a simple 9×13 white/chocolate cake. I used black food coloring to create the icing. Once the frosting was smoothed on (using a butter knife and a little water) I used blue/green frosting to write the PS2 on the top.

The controller was a little more difficult. I had to bake a small square cake (using a 9×9) and hand-carved it into the shape of the controller. The buttons on the controller were created with homemade fondant (2c powdered sugar, 1tsp glucose, and 1 egg white).

I used a little bit of black food coloring and rolled the fondant until it resembled he color gray. I used other colors of frosting to pipe the details on the controller. The entire cake took less than 3 hours to decorate and was a hit! Everyone loved it and the guest of honor just couldn’t believe his eyes!