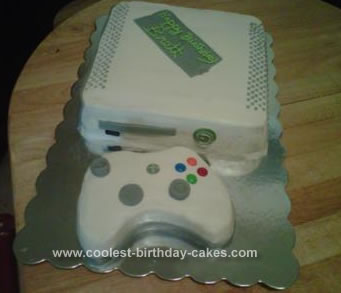 My daughter and I made this Xbox birthday cake for a friend’s 13 yr. old son. He just loves X Box. His mom originally wanted a controller for Xbox, but once my daughter and I got started we couldn’t stop. This was our first attempt on the whole gaming system with controller.

I took the dimensions from an actual Xbox, as well as the controller. I made the Xbox in a 13 x 9 sheet pan, then cut in half and sculpted it to shape. I sculpted the controller from an 8 in. round pan. I covered both in butter cream and used fondant for the buttons. I used 4 m&m’s for the additional buttons.

I took a tip 3 and cut out all those little air holes, big job but in the end I think it made it look even more realistic. The back has the fondant wires, so it looks real from all angles.

It was a very big hit. The birthday boy said it looked identical to his own.