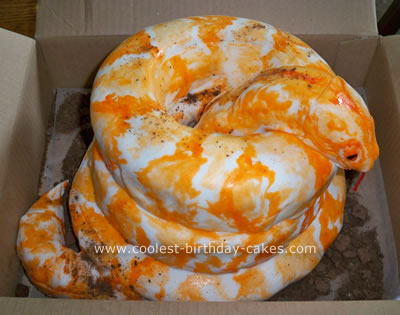 I looked all over for a snake cake idea for my son’s 7th birthday. Then I found this site and was rewarded with SO many cool ideas that inspiration hit and I thought “why can’t I make a coiled snake?” So, I tried it out and this was the result.

Once the cakes were cooled I cut the center out of one of the cakes top-wise and down (which you’ll use for the head/neck and tail) then each bundt cake is cut length-wise at it’s side. This gave me 5 “coils” in all.

I then frosted the coils and wrapped them in a thin layer of fondant (two boxes of white pre-made fondant were used). I placed the largest coil on the bottom and then staggered them by size for effect.

The last coil, I cut in half and used one half for the tail and another for the head and neck. These were wrapped in layered fondant and sculpted for a more snake like effect and “stuck” together with water. The water pretty much glues the fondant together.

Any areas that looked too “apliqued” I just built up and sculpted with extra fondant (like the tail). Then the head and neck of the snake cake were made as the rest, w/ the exception of the tounge, which is a fruit roll-up of which the end was wrapped in fondant and watered to stick to the bottom of the jaw. The eyes are also fondant rolled in a ball and again applied w/ water.

After all was done, I painted the “skin” on the entire cake with a paint brush and orange food coloring diluting the food coloring w/ water for color variation. I did end up w/ one extra coil and a half extra of the inner top cut, having only needed three coils for the body and one cut in half for the head/neck and tail.

I do recommend refrigerating it until you’re ready to present it. I took mine out a few hours beforehand and a few minor splits due to weight appeared. They were easily fixed w/ water and smoothing out though.

My son loved it and some of the guests were a little freaked out by it! :)