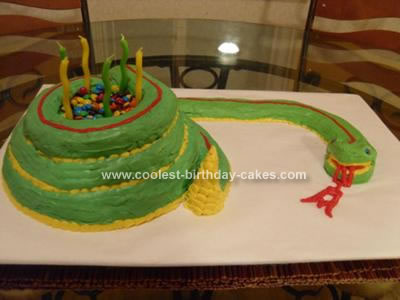 This homemade rattle snake cake was made for my son’s snake-themed 6th birthday party. I started with a chocolate box cake in a tube pan (the kind made for angel food cake). Once it was baked and cooled, I sliced a ½ inch “doughnut” shape off the top to level the cake. I carefully reserved this piece for the head and front of the snake. I sliced the rest horizontally into three layers.

To assemble: I laid the bottom, largest “ring” near the bottom middle of the cake board. I cut through one side of the layer at an angle and slightly changed it from an O shape to a Q. The tail of the Q will be the rattlesnake tail. I lightly frosted it with chocolate frosting.

Next, I laid the middle ring on top, splitting it as well and overlapping the layer on itself to make it like a snake body coiling. I frosted this only around the very innermost portion of the ring.

I now had one remaining ring and the “doughnut” shape that I had cut to level the cake. The final ring I cut into 2 concentric rings by carefully running a knife midway through the ring. I then cut the outermost ring into 2 pieces: 1/3 and 2/3, or a C shape and a slight curve. I put the C shape on the top layer of the coiled body, gently bending it to fit. The slight curve was used to make the snake body curve from the top of the coil to the board. The inner concentric ring was cut and the pieces were used along with the doughnut shape to form the “neck” and head of the snake.

I wanted the overall form of the homemade rattle snake cake to be in a number 6 shape. I used small bits of cake to create an open mouth and to support the part that started to uncoil down to the board. I cut another small triangular piece to form a standing rattle which I supported with a toothpick that protruded into the board. I used frosting to secure any joined pieces.

I frosted it with tinted canned vanilla frosting, starting with the “belly” parts of the snake. I made small “scales” from a Wilton leaf tip, overlapping beginning at the rattle. I coiled the belly color around the snake ending at the head. I then used a flat frosting tip in the body color (green) to make smooth, flat striped around the entire length of the snake.

The inside of the coil was frosted and filled with M&Ms. I tinted some frosting red to be used as a center stripe and for the tongue. My son’s name was written as the tongue. Mini M&Ms were used for eyes. Wiggly snake-like candles were standing up in the M&Ms.

The whole thing was quite shocking to see and my son absolutely loved it!