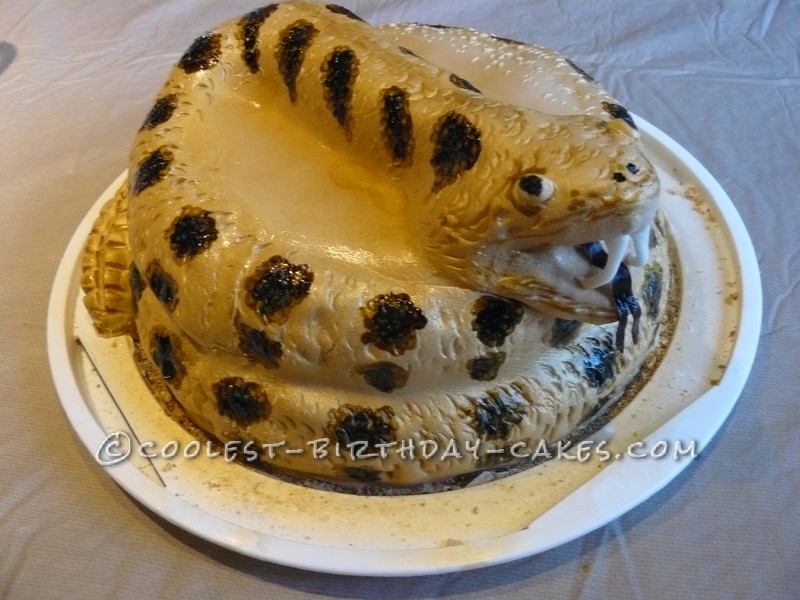 My soon-to-be-five-year-old son, Mackenzie, was (still is) completely obsessed with snakes.  He insisted on a snake cake for his fifth birthday, something along the lines of the now-famous albino Burmese python cake that is all over the Internet.  I had only used fondant to add decorations before, never to cover a whole cake, so I was well into new territory on this one.

I baked three round cakes in decreasing sizes (pound cake for the bottom layer for added stability), starting with a 10-inch round on the bottom and then froze them. I took them out of the freezer, stacked them and began carving, saving one of the larger carved pieces for the tail and one for the neck.  Nearly all of the top layer does get carved away, which feels kind of crazy.  I formed the head and rattle out of rice crispy treats and refrigerated them so they would be rock solid for the decorating process.

After the carving, I added the head and rattle and crumb-coated the cake and rice crispy treat pieces with store-bought frosting – I would probably recommend a royal icing or something that will harden up a bit more if I did it again. When that was dry, I added the full layer of frosting and chilled it again.  Next, I used purchased fondant and flavored it with vanilla, then colored it a beige for the Timber Rattler design my son and I had decided on (I researched and printed out about 8 different pictures of timber rattlers, rattles, fangs, etc. to get the shape of the head and tail right).

I draped the fondant in three separate pieces, which was pretty messy.  At one point, I was pretty down about my progress and showed my son what I had and told him I wasn’t sure this was going to look at all like we wanted it to.  To which he replied, “It’s okay if it doesn’t look good, Mom.”  He definitely took the pressure off and I was able to keep working and just enjoy it.  Back to the fondant, next time I would try to do the whole thing as one piece.  But it still worked out.  I just had to work a little longer to “join” the separate pieces, using the coils as a good place to hide the seams.

I added plain white fondant for the fangs and as a base for the eyes. Next, I added some “scale” texture to the fondant.  Work fast though, fondant can dry pretty quickly.  I chilled the cake again, let the fondant dry and then gave it a layer of Color Mist gold metallic decorator spray (bought mine at Michaels crafts) and chilled again until the spray was dry.

Then it was time for the fun part…decorating.  I used clear alcohol (rum) to liquefy my cake decorating colors so I could brush them on and create the snakeskin.  I dipped Q-tips into the alcohol, then into the colors, blotted on a paper towel and then decorated the cake.  It took time, but with each detail, it looked more and more like the snake cake my son wanted. A piece of Fruit-by-the-Foot cut into a forked shape and colored black completed the mouth.  In the end, our rattle snake was a big hit!  My son declared it, “Awesome!” and he was eager to show it off to his family.  Adding a little bit to the pressure of the day…I was also cooking Thanksgiving dinner for 13 people when I was working on the fondant and decorating the snake, because we celebrate Mackenzie’s birthday on Thanksgiving when the whole family is in town.  My mother-in-law was completely freaked out about eating Mackenzie’s snake cake, but he couldn’t have been happier! 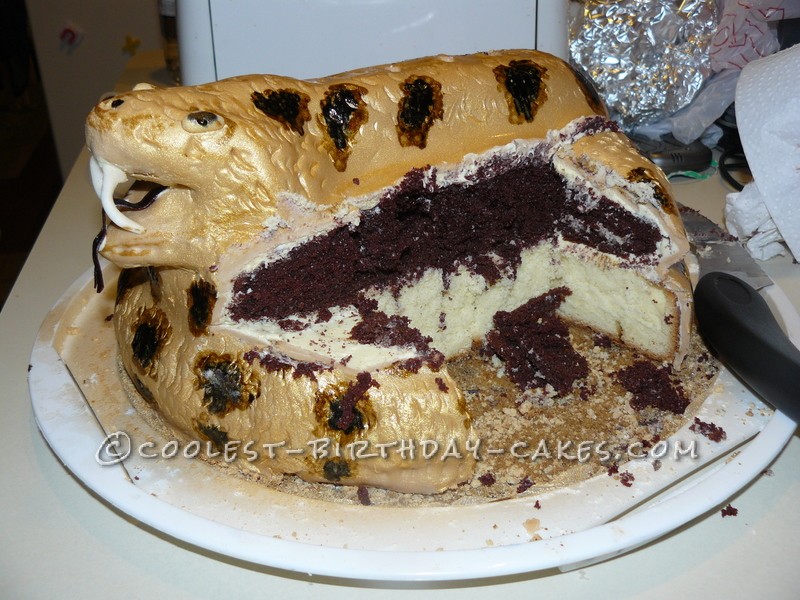 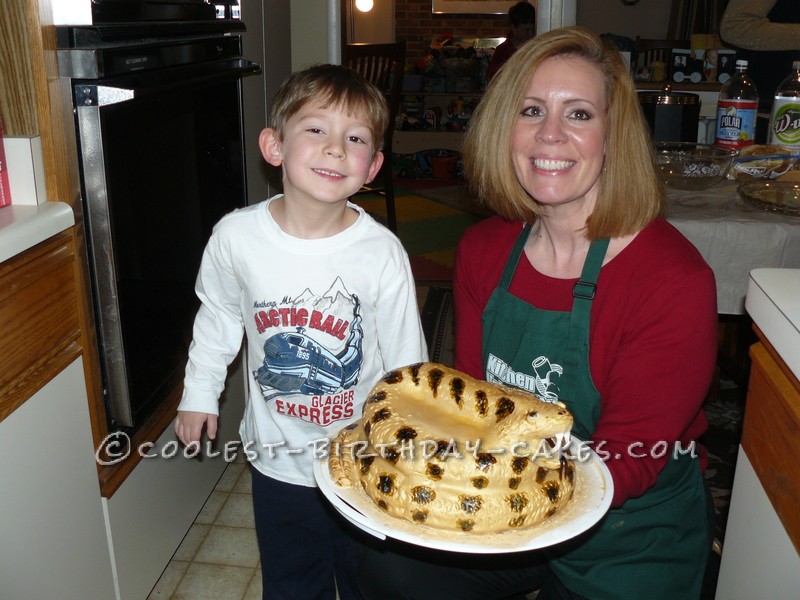 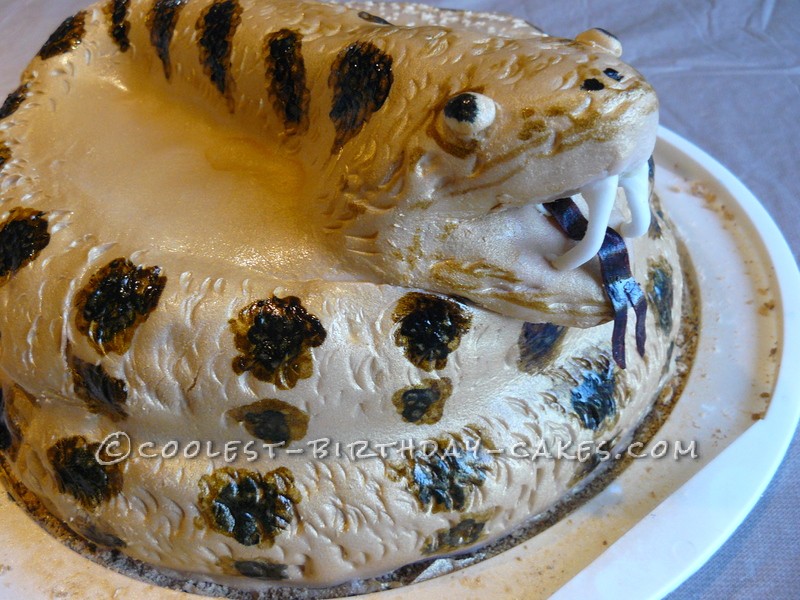