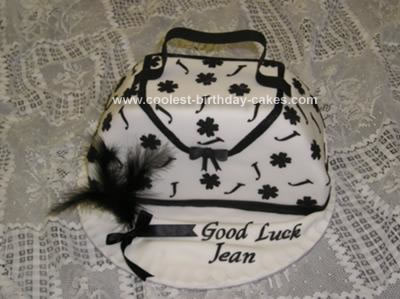 I made this Handbag Cake for my friend who loved handbags. I made 3 10″ round sponge cakes, cut a portion from the top to give it some shape then jam and butter creamed them together onto a 13″ round cakeboard. I then put them in the fridge to harden a little about half an … Read more 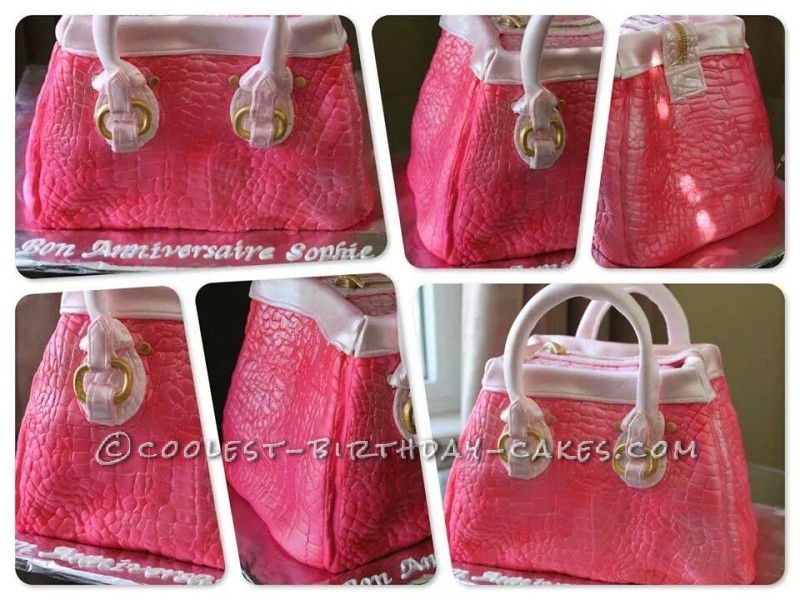 I had to come up with something for my sister-in-law’s bday.  I decided to make a purse shaped cake for her in her favourite colour…pink!  It was one of the craziest, most detailed cakes I’ve made, but a lot of fun! I had to start on parts of the decor early so that there was … Read more 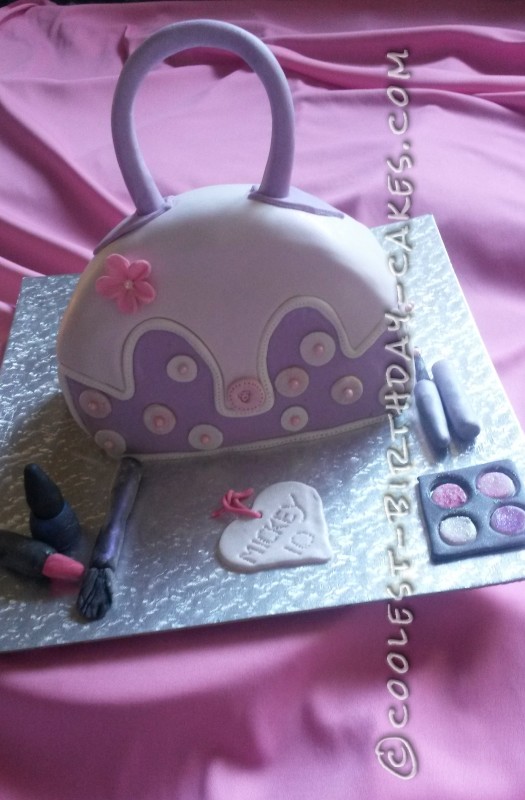 I was so nervous, but so excited about making this handbag birthday cake.  I started the cake a week before so the detail could dry. I had promised my daughter that I would make her a handbag cake with makeup and had no idea how I was going to pull it off. I made 2 … Read more 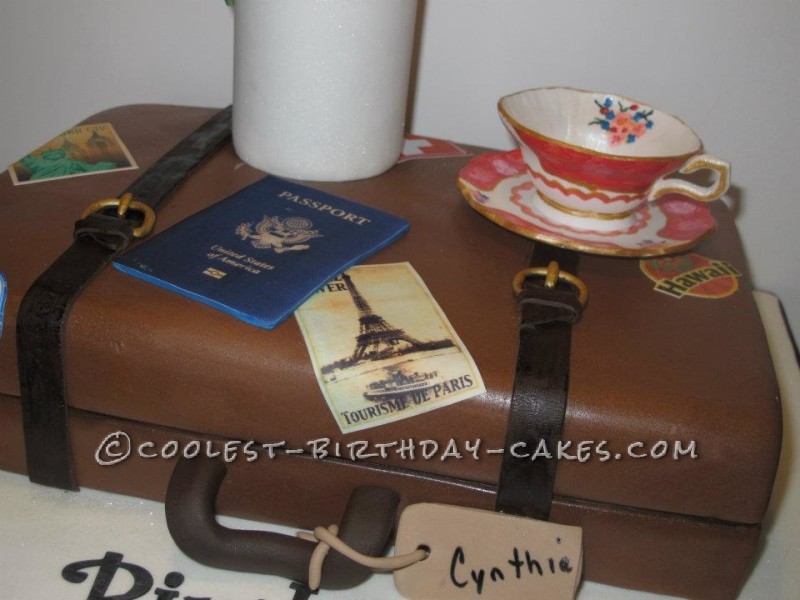 This was a birthday cake design that I made on Christmas day.  It was due the next day and we were leaving on vacation the next day.  The worst part?  My friend was delivering it! This was a surprise cake from the daughter of a lady turning 50.  She is a passionate traveler, loves tea and tea … Read more 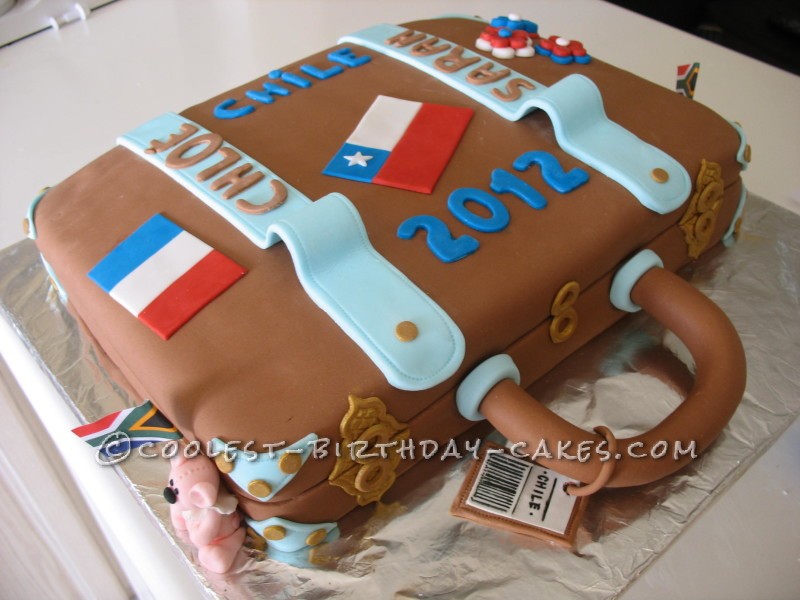 I got a distress call from my hairdresser one Saturday who said another client of his was in dire straits as she was trying to make a suitcase cake for her daughter who was leaving for Chile along with another schoolmate. I responded to the call and said she was welcome to come over on the … Read more 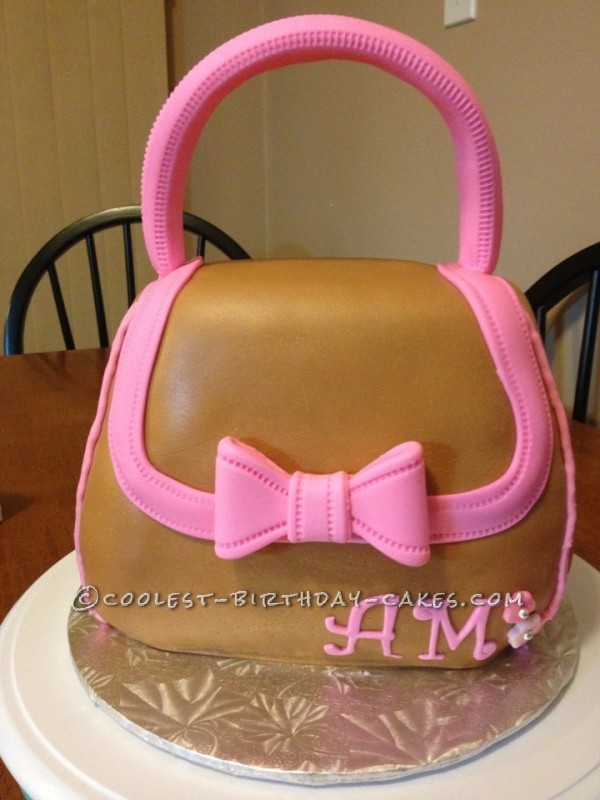 This purse birthday cake was for my husband’s boss’ daughter’s birthday (hope that wasn’t too confusing, lol). I decided to go with a 3D purse, so I baked two quarter slab cakes, cooled, cut each in half and sandwiches between layers of butter cream. I chilled the cake to let it firm up before carving. … Read more 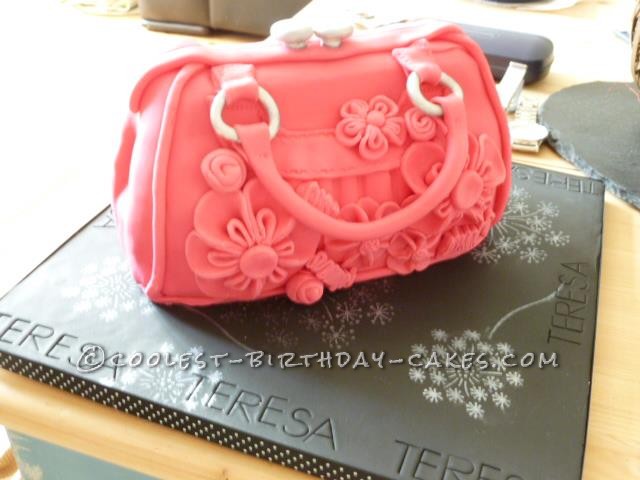 I made this handbag cake from a rectangle cake, which I cut and layered.  I then froze the cake and once frozen I carved the shape.  For the board, I covered in icing as normal.  I then got a stencil and painted Trex and silver powder to make the flower shapes.  I impressed my friend’s … Read more 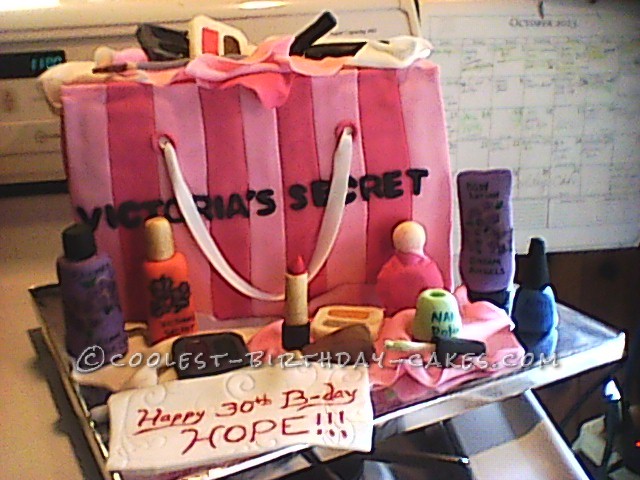 A lady sent me an email asking could I make this cake. The photo she sent was very blurred so I asked her to describe what she wanted. She replied back, a Victoria’s Secret shopping bag with make-up. The actual bag cake only took a couple hours to make and cover with fondant, using an … Read more 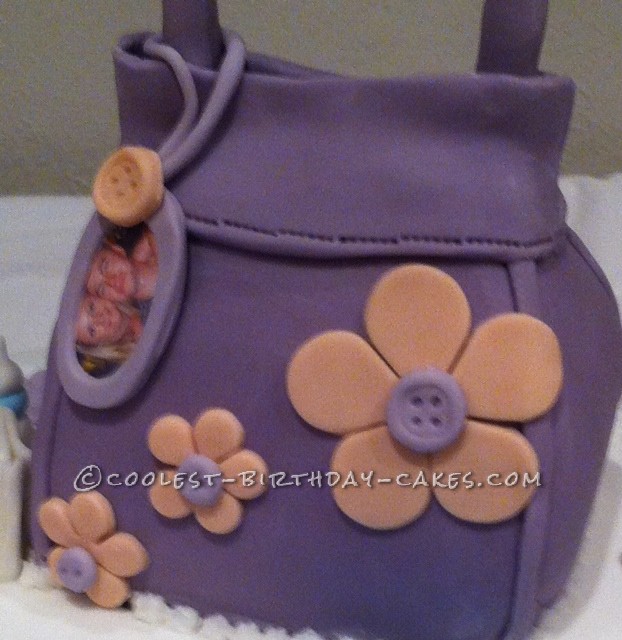 It’s soon my daughter’s birthday. I thought I’d make another handbag cake but a different look this time. And I wanted to incorporate things in her life that mean the world to her, this is what I did I had to do all the modelling first. I made the face and the legs of a pug … Read more 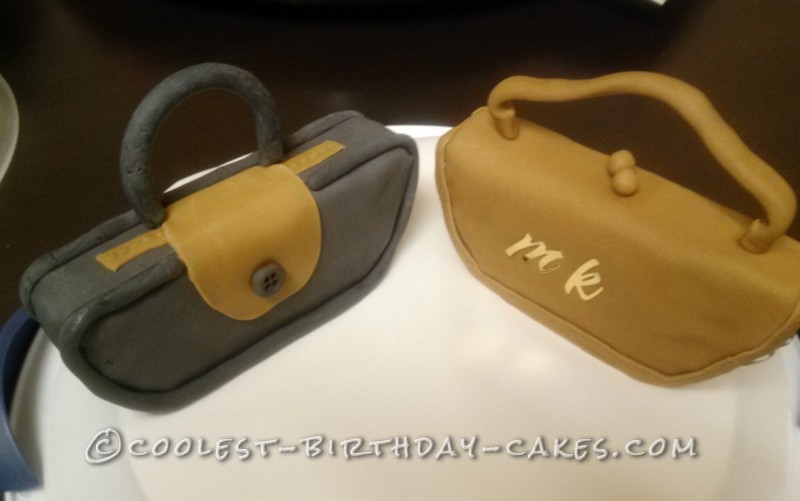 I was just sitting home one Saturday and decided to try making purse cakes. I remembered a YouTube site I had seen and decided to make my own. I baked a 6 inch round cake layer and cut it in half shaping it the way I wanted the hand bag to be. I iced each … Read more 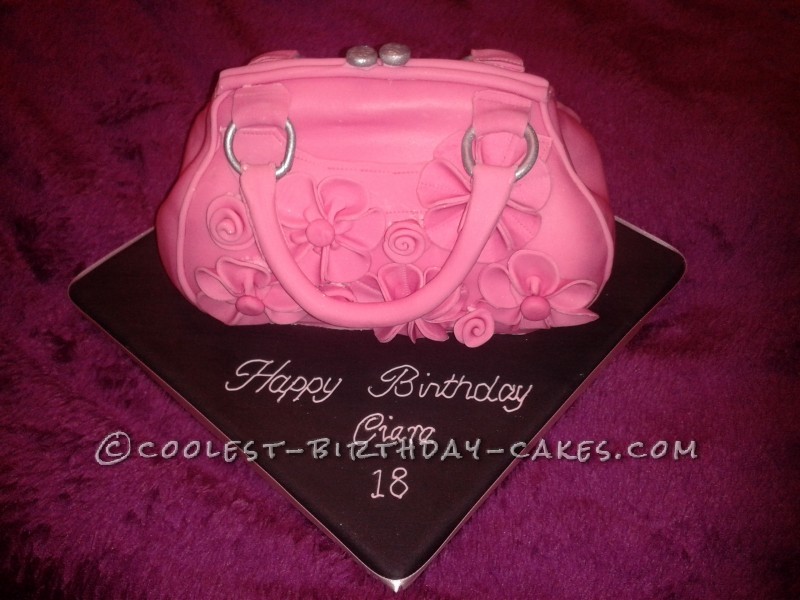 I made this pink handbag cake for a friend’s  niece. I started by making a 10 inch square cake. I cut it in half and stacked the two halves together sandwiched with butter cream and jam so that it was a tall cake. I carved the cake using templates then covered in butter cream to … Read more 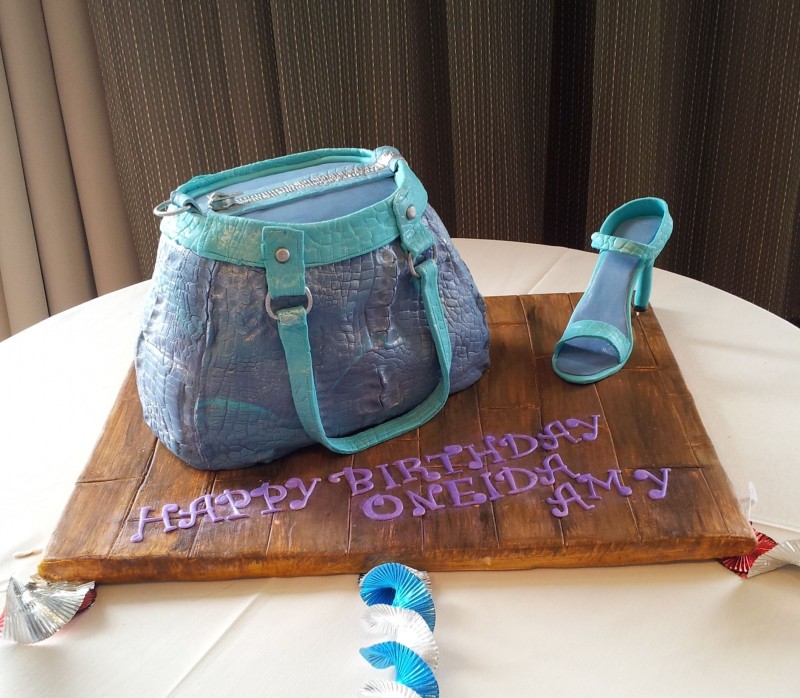 I was asked to make a cake for my aunt’s 75th birthday and cousin. I decided to make a purse cake because I had just taken the Craftsy “Handbag” course by Ellisa Strauss. I followed her instructions but I still managed to carve more than I needed to carve off the cake and changed the … Read more 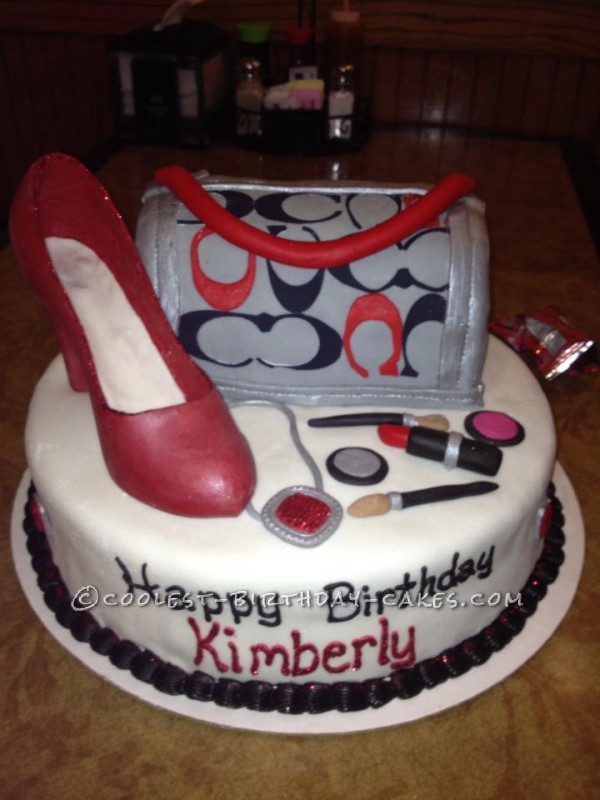 I first baked two 12″ round chocolate cakes for this purse cake. I put a paper thin coat of chocolate butter cream icing on each cake because  my friend wanted raspberry jam filling, and I find the filling can sometimes makes the cake a little soggy when it’s made a few days in advance. I put some … Read more 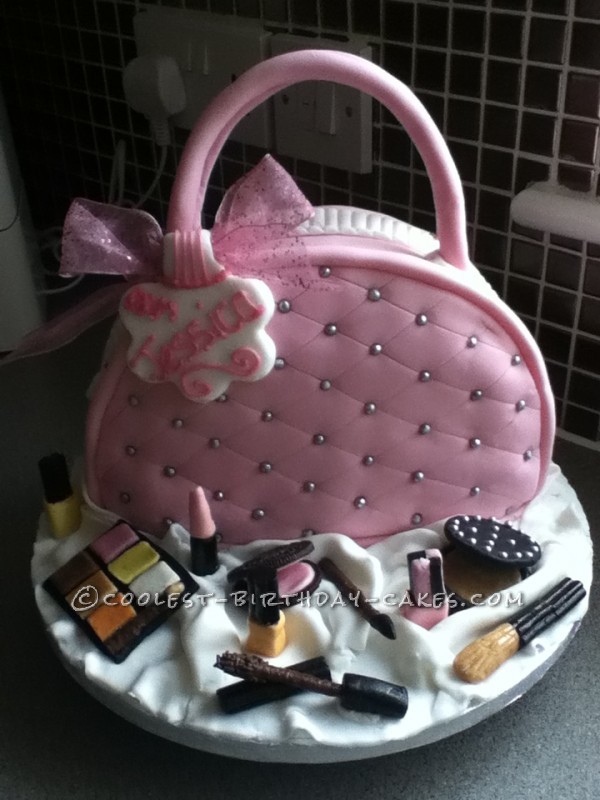 First I had some fun creating some make-up, from Liquorice Allsorts, and chewy fruit sweets, a couple of orange matchmakers and some melted chocolate. The mascara end was dipped in chocolate then gently coaxed in chocolate strands to give the brush effect. The bag cake is a 9″ round sandwich cake with jam and butter cream filling. … Read more 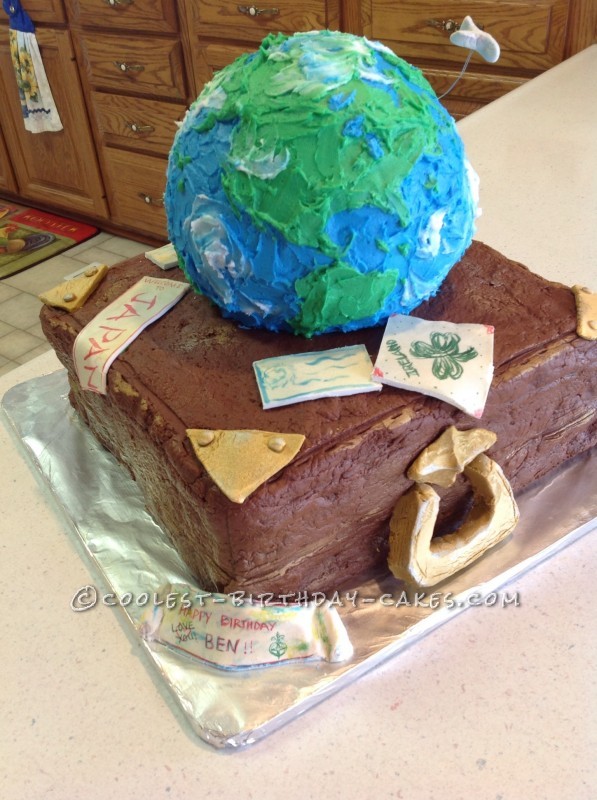 This Around the World Travel cake was inspired by my sweet nephew. He has been planning his “world party” for about nine months. He is turning seven and is a huge fan of coffee, chocolate, and cooking shows. His love of coffee and chocolate inspired me to make a cake that really knocked is socks off! … Read more 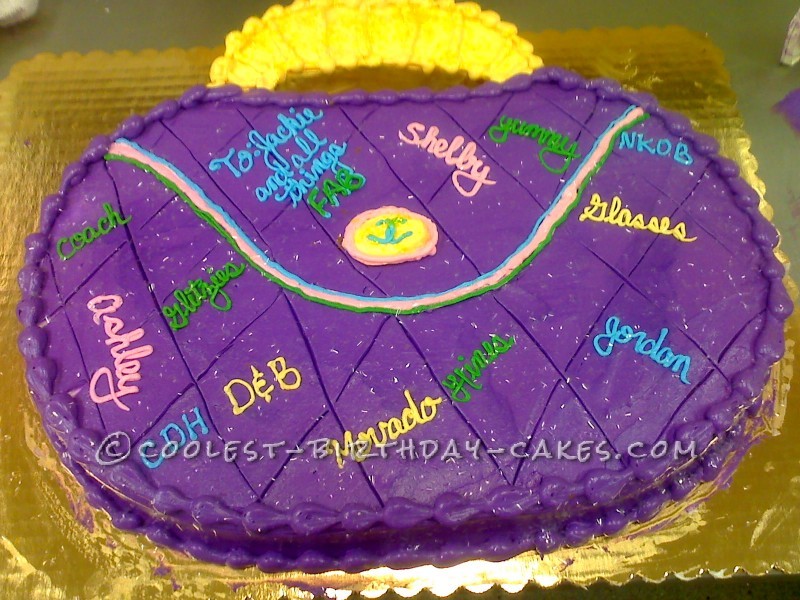 This purse birthday cake was also another first for me. I did this one for a regular customer of mine  at a grocery store where I worked. It was for a girl she worked with who was a total purse fanatic. I started out with a full sheet an just started cutting, shaping, basically hacking … Read more 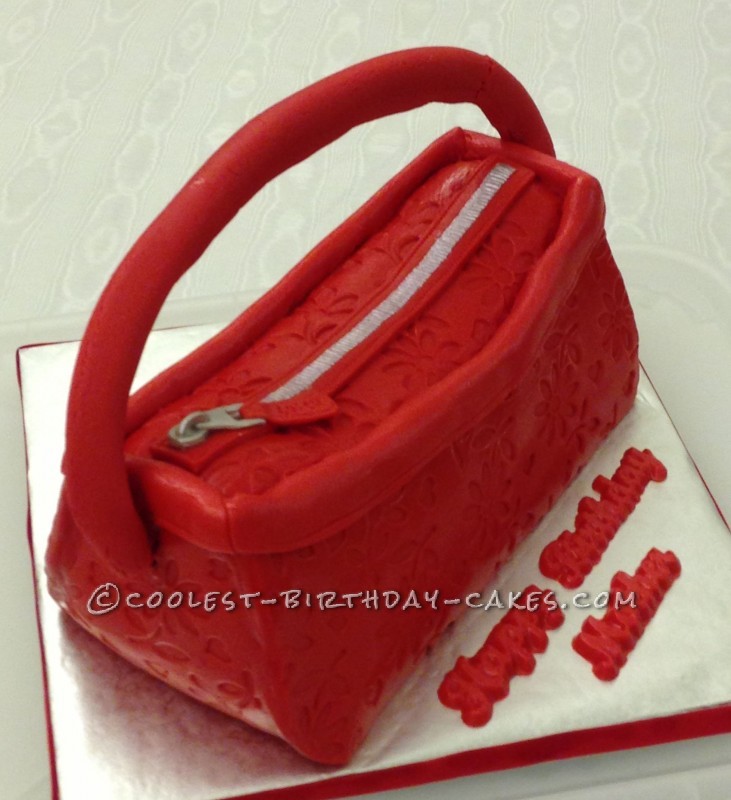 My mother in law’s birthday was late February and like most women they all like bags and can’t get enough of them. My inspiration for making this Coach purse cake was actually her bag which is black and since red her favorite color I made a red cake. I like to make small cakes that are just … Read more 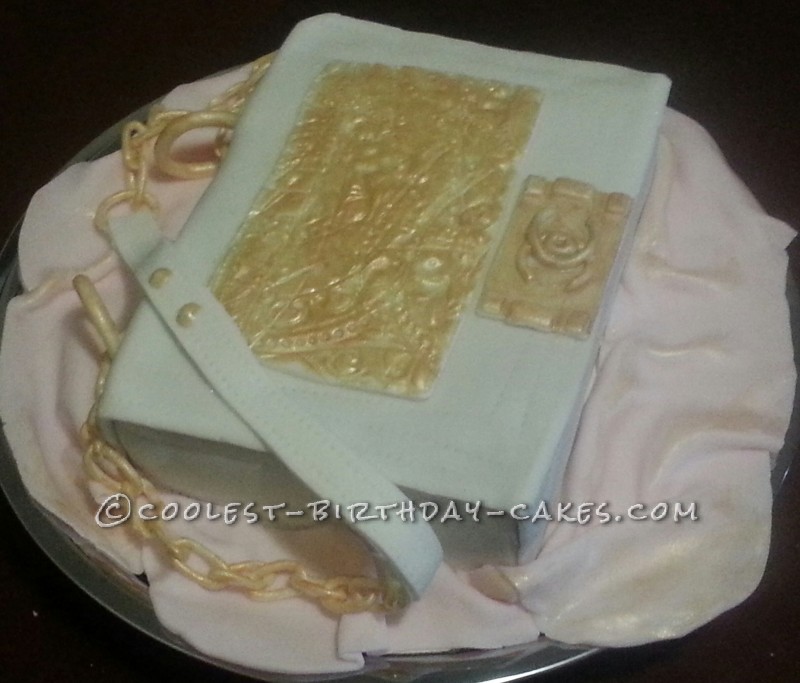 This cake was made with the intention of it being 3D however, I felt I did not trust it. It was a Texas chocolate cake with a chocolate frosting. .. bad choice for a white fondant cover but it worked out.  I lay the cake down and covered it.  The chain and gold buckles were … Read more 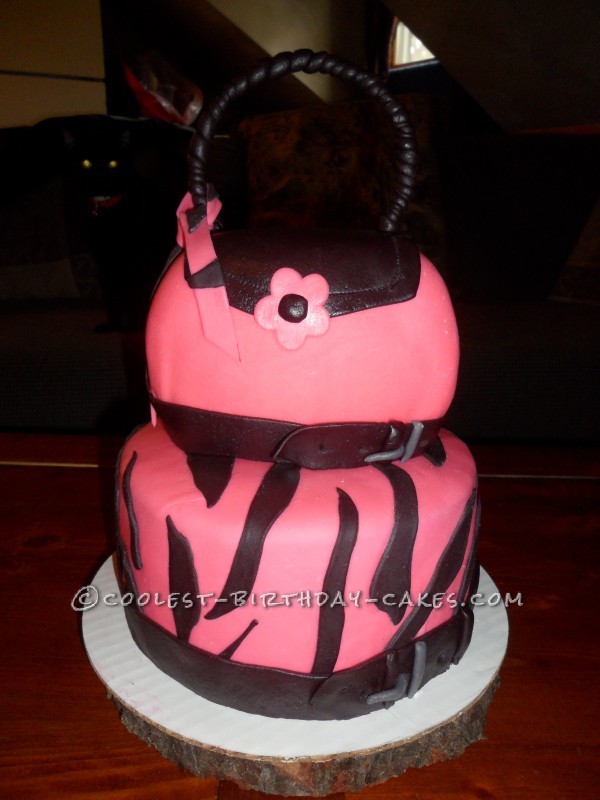 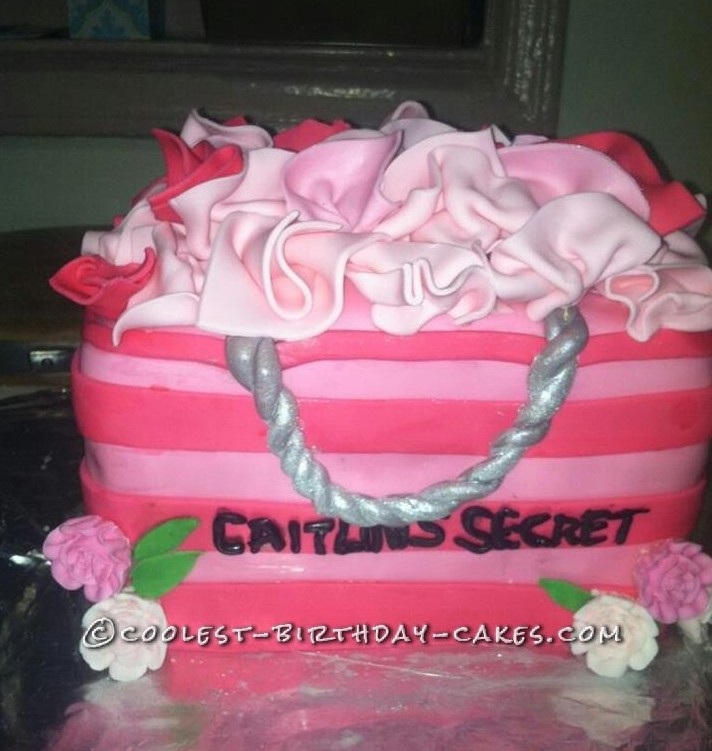 My daughter spends a great deal of her time and money in Victoria’s Secret and VS Pink Store. I decided about 8 months ago exactly what type of cake I wanted to make her for her birthday in March. I told her that I knew what cake I was going to make and how cool … Read more 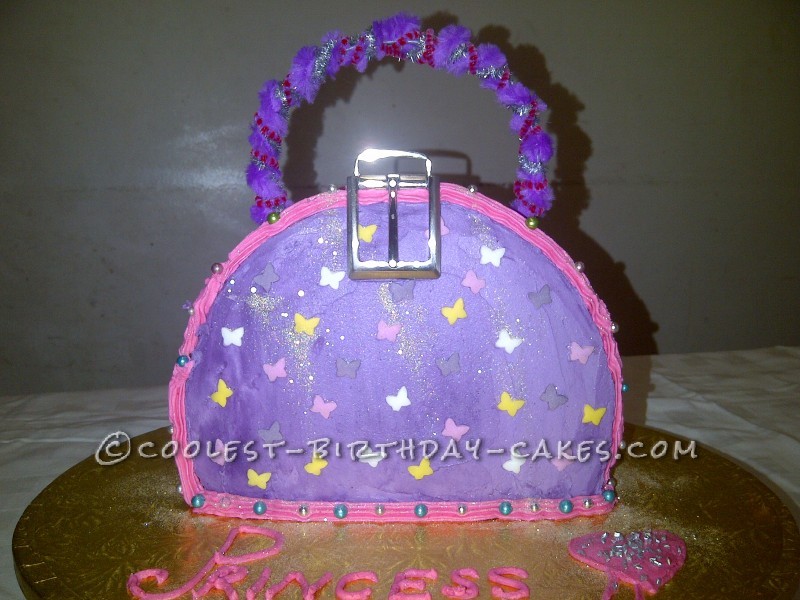 This Princess handbag cake is definitely one of my better cakes. I made this for my 10 year old daughter who has an obsession with purple. I didn’t have a clue about how I would get the cake to stand upright, so I Googled a few pictures and watched a few youtube videos. I must say the snippets … Read more 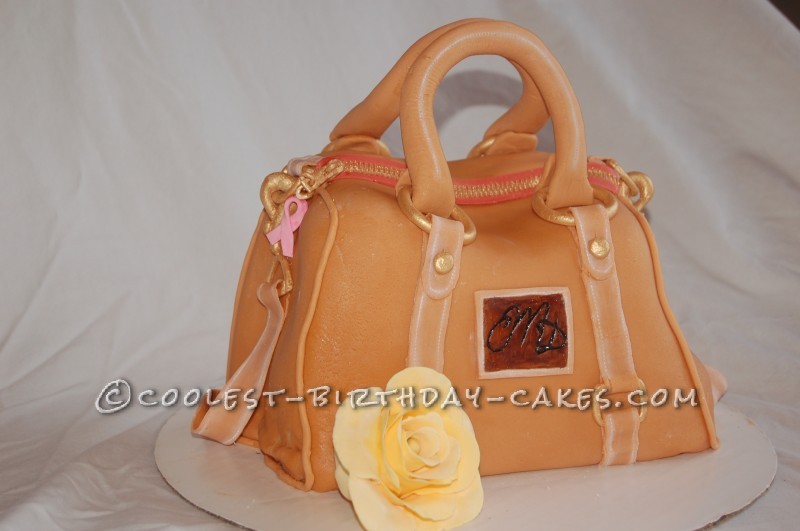 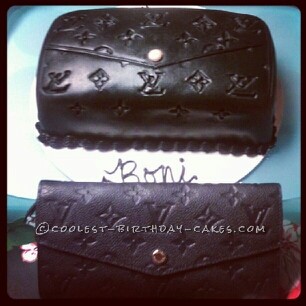 I made this  Louis Vuitton wallet cake with a chocolate mocha cake with fudge frosting for my boyfriend’s sister’s birthday. I covered it with black fondant and individually drew the details for this LV wallet, to match her wallet. Everyone was impressed!  I love seeing their reactions to the cakes I make. 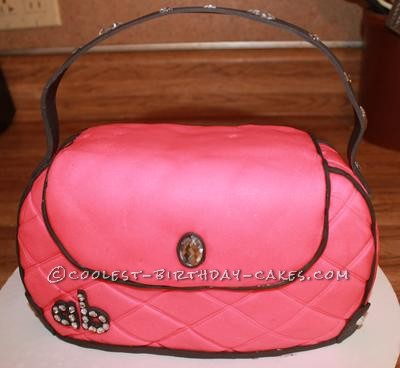 I’d been making cakes for my kids since my oldest’s first birthday, and discovered I had knack for it. As these things do, word got around and my hair dresser asked me to make “an amazing and beautiful” cake for her daughter who was turning 21, but feeling down in the dumps since she was … Read more