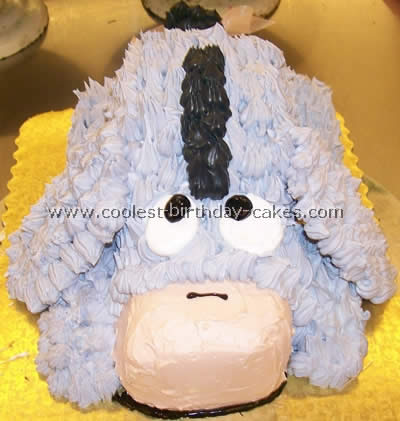 I made this celebration cake by cutting an 8″ round in half to make a half circle then I stuck it together with whipped cream icing. The nose and legs are wedges cut out of a second 8″ round. I used a grass tip and whipped icing to make the fur. The ears are Graeme crackers that I cut the corners off to make them look round.

This is an Eeyore celebration cake I made for my daughter’s second birthday. There was also a Pooh Bear cake that was made from a Wilton pan that went along with it. It was a chocolate cake with homemade buttercream icing that was baked in a 9×13 pan.

I found a picture of Eeyore that I liked from the internet and saved the picture as a jpeg. I then opened it with Paint and flipped the picture (so when the image was actually on the cake it would be the correct view) and then enlarged it to the size that fit the celebration cake.

I printed off the picture and taped it to the counter. On top of it I placed wax paper (wax side down) and taped that on top. I then traced over the important lines in the picture using chocolate icing that I tinted black. I then un-taped the wax paper from the counter and placed it on the cake (I had already frosted the entire cake white). I then went over the lines, as they will not come out completely presentable and then filled in with the appropriate tinted icing.

It was a hit! I use this same method with almost every celebration cake I create and all of the characters that I do not have pans for. I personally think it is more fun and I am able to get very creative with it.

This is a cupcake cake. I just found a picture and placed it on the cupcakes. Then I iced over them all as one unit.