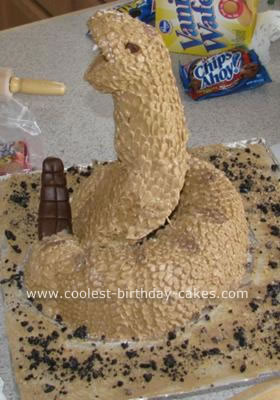 I made this Rattle Snake Cake for my nephew who was bitten by a rattle snake in 2006. It was a HUGE hit!

I made a white cake (from a box)in a bundt pan, cutting out about a quarter of it. I did have to straighten the curve of the cake slightly, which caused a crack. I just filled it with a little extra frosting and no one even knew!

For the part of the body that stood up I used a Sara Lee pound cake (so that it would be stiffer).

I used tip #10 to make what looked like scales. I started from the bottom of the cake and worked up so that it looked like that scales laid on top of each other.

The eyes and rattle are made out of tinted fondant also. I helped to stabilize the cake using wooden kabob skewers randomly placed as needed. The fangs are made of white fondant.

Once the cake was completely frosted I used the black Wilton color mist and a diamond stencil (I just cut a diamond shape out of paper and used it as a stencil) then lightly sprayed that pattern along the back of the snake up to the head. I then crumbled Vanilla Wafers and Oreo cookies around the bottom of the Rattle Snake cake.