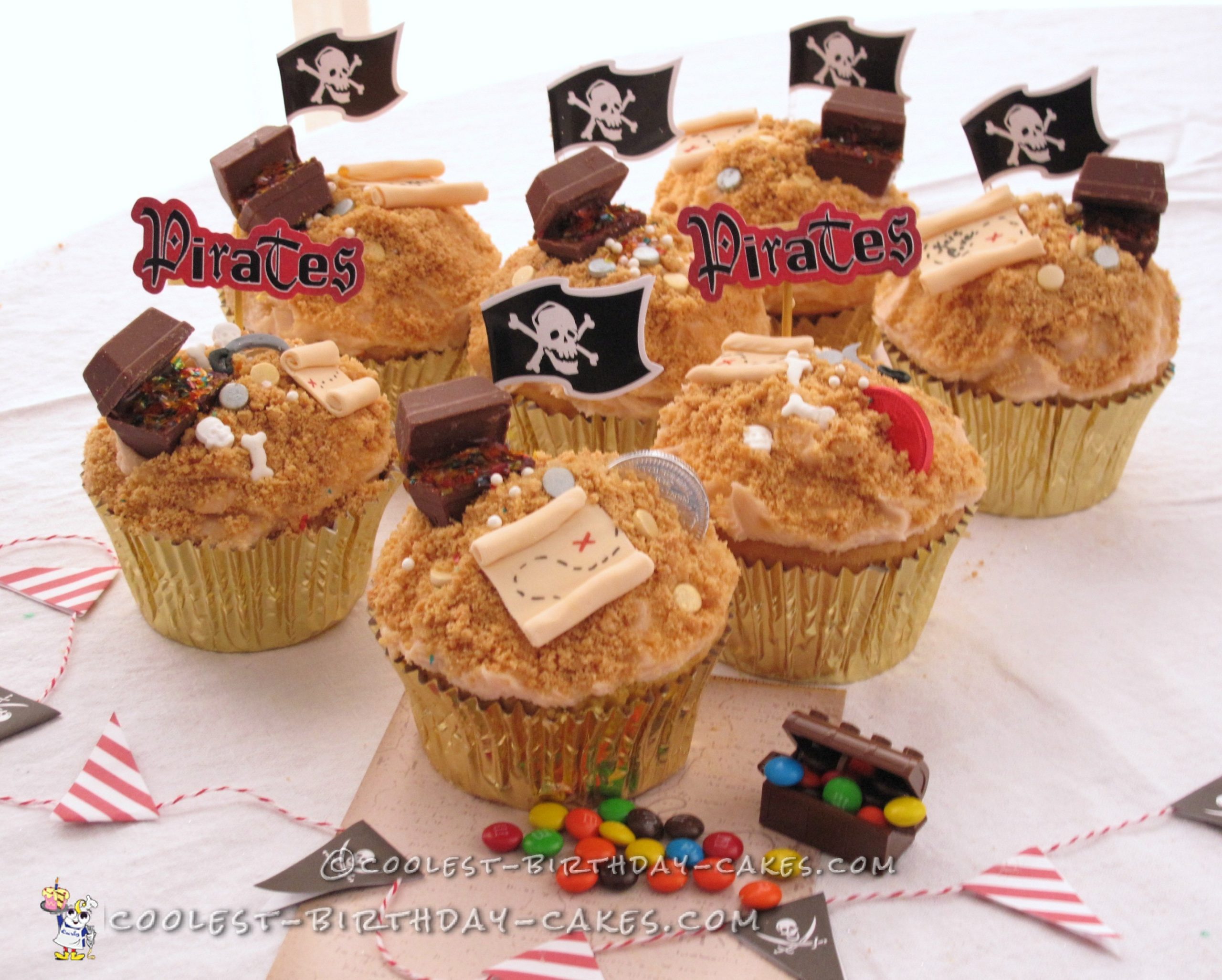 These Pirate Treasure cupcakes were for a 4 year old’s birthday party. The desire was for a feeling of pirate hidden treasure. The client wanted Jumbo sized cupcakes to allow decorating and treasure.

I learned that sadly there are hardly ANY great decorative jumbo-sized cupcake liners or wraps so I went with gold foil. The cupcakes were French Vanilla flavor,  with buttercream frosting tinted to look like sand colors.   I then crushed Pepperidge Farm vanilla cupcake flavored goldfish to make sand.  Vanilla wafers would work too.

Once the cupcakes were baked, I used a thin serrated knife like one would use to carve pumpkins, and I carved out enough cake in the center to insert a Lego brand treasure chest which was filled with mini M&Ms. Then I iced and coated with the crumbs.

The day before, I’d made some fondant treasure maps by rolling out very thin ivory tinted fondant, using a little wheel fondant cutter to cut roughly in the shape of a long rectangle, and then rolled the edges up like a scroll and set aside to dry.

Once dry, use food writer markers (fine tip) to make the dots and red x’s. The birthday boy’s name was written on his special cupcake treasure map  “Kai’s Cove”  which I didn’t have showing in this photo. I also had some candy skulls and bones from halloween decorations,  and I also made a few little pirate swords with gray and black tinted fondant. Pirate Flag cupcake toppers and 3D stickers attached to tooth picks were nice decorative toppers, as well as Pirate Hate cupcake rings which were not in this photo.

I found gold foil and colored foil coins at Party City which were inserted into most of the cupcakes depending on the design. The little chocolate treasure chests are mini Kit Kats, which I glued into the shape of a trunk using piped melted Wilton Chocolate Melts. The “jewels” in the treasure chests were just edible multi color glitter flakes and mini candy pearls. These were a lot of fun to do, and I am sure with more time I could have incorporated other ideas.