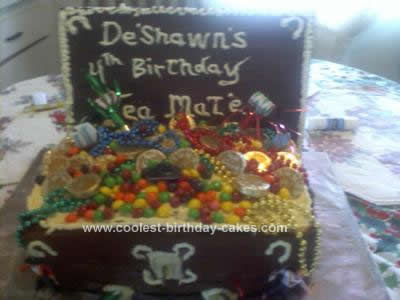 For the Boys Pirate cake I used 3 layers one chocolate one strawberry and one white cake mix the outer layers were iced with store bought chocolate frosting as it tends to withstand being out of fridge. The boarding I bought was from the 99 cent store for back board. I covered it with chocolate icing the night before and trimmed it with white icing allowing to dry over night.

The rest of the cake was decorated using pirates skittles, coins, beads and 4 pirate candles. I also added two blowers, also had a small key that I inserted into cake to make it look more real. I used wooden skewers to attach the lid to the back of cake. I also used gold wrap on bottom of board then used children’s glue stick and sprinkled pixie sticks to make it look like sand with two small pirate toys added to the side.

For the girls pirate cake make one single layer round cake, strawberry and cupcakes small, to add to layers using finger pop rings on upper cupcakes. I used one treasure chest candle on center cupcake and added 4 small pirate candles at the party.

This Homemade Pirate Treasure Chest Cake and Cupcakes was a simple last minute cake used some beads and party blowers around bottom of cake cutting most of the length and placing them into bottom of cake.

Both cakes were a joy to make and a big hit at the party. 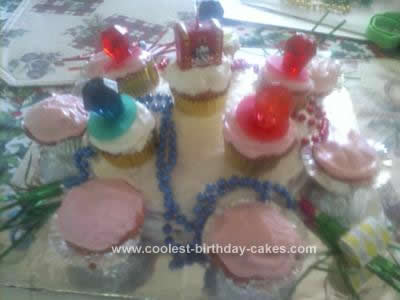