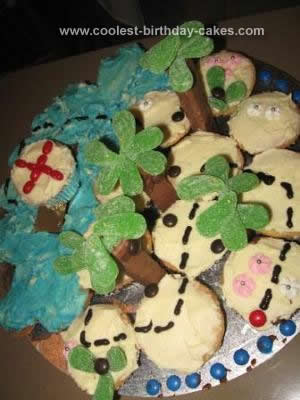 Hi, my name is Zoe. I am nine years old. I live in Australia and go to North Melbourne Primary School. My teacher Mark is moving to Bali for six months to surf – oops, I mean teach – and my class is throwing him a surprise birthday party tomorrow (shhh, don’t tell anyone). Mark is CRAZY about pirates, so I came up with the idea of making treasure map island cake for his party.

First I made 36 vanilla cupcakes using the totally reliable cupcake recipe from Marian Keyes “Saved by Cake” book. I frosted the big cupcakes with yellow butter cream icing and grouped them into an island, then frosted the small cupcakes blue and white and made them into the sea. One special cupcake was placed on its own on top of a chest of buried treasure (a box of three Lindt chocolates).

My big brother Finn (age 12) helped me to make coconut palms, using a toothpick to attach spearmint lollies to chocolate nougat bars. I melted some chocolate in the microwave to use as glue to stick coconuts (brown M&Ms) under the leaves. Then we used a black icing pen to draw a map to the treasure, and made a red jellybean X to mark the spot. I hope my teacher likes it. 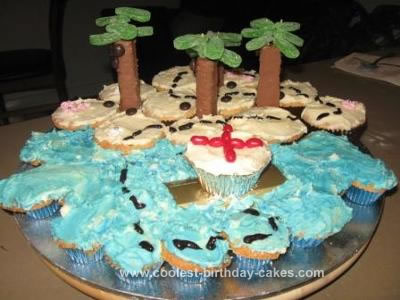 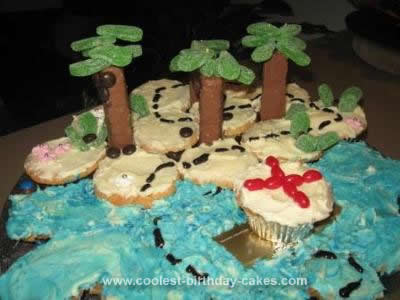