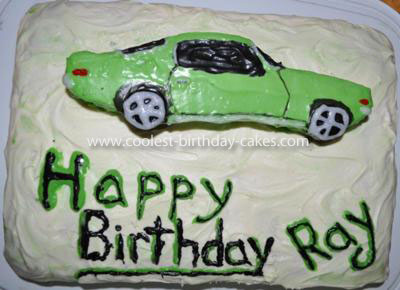 This 1970 1/2 Camaro Car Cake is not what I had initially intended to do. I was going to do a whole 3-D real looking carved car cake, but I didn’t have the time or patience for such a task, so instead I made this one. My challenge was to make a 1970 1/2 Camaro cake in the new 2011 Camaro green.

I got a picture of a side view of a 1970 1/2 Camaro and printed it out and then traced the shape when I got it the size I wanted. I was going to do a big cake of just the car but when I found out how many guests were attending I decided to make a smaller car and put in top of the sheet cake and tried to make it kind of look like it was coming out of the cake, or 1/2 of it got buried in the cake.

The cake is a simple vanilla cake recipe which is so easy to make and carves well when semi-frozen. The icing for the cake and the car is a homemade concoction – white chocolate and whipped cream mixed with some icing sugar; it turned out pretty good.

I had to use a lot of standard green food coloring to get the green and for the black I bought some Wilton black food coloring which was more like a paste so I didn’t need much to make the icing black. The wheels and the side orange and red lights were applied with Wilton Sparkle Gel; I used some food coloring to change the color. I find that stuff to be kind of runny. You can’t tell by the picture but there is part of a marshmallow for a head light which was basically dipped into silver gel. The back tail lights which you also can’t see was also done with the silver gel. The lettering was basically painted by hand.

The cake went over well and it was fun to make. I do want to tackle a real carved 3-D cake next, and maybe even cover it in fondant. Until the next creation….