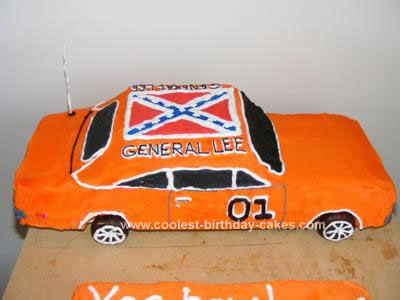 A couple days before the General Lee Car Cake needed to be done, I made a batch of royal icing, Wilton has a great recipe for it, and made up a few different bowls for different colors. Blue, red, black, and white. I had the flag, windows, and decals on the doors all drawn on paper. I put wax paper on top of these, then taped it down so it didn’t move, and just traced over them using my royal icing. Let all of them air dry until it’s time to attach them to the cake. Be VERY careful removing the wax paper from your decals, peel the wax paper away from the back of them rather then trying to peel them away from the wax paper! The wheels are mini doughnuts.

I made the cake by baking a 16inch square cake, cut it in half, then stacked the two halves on on top of the other. A 9×13 could probably also be used, but bake two of them. I had the car all drawn out on paper the size I wanted it beforehand, side and top views. I froze the stacked cake so it would be nice and easy to cut(obviously TOO frozen doesn’t work), then I attached the drawn out car to the side and top of the cake by sticking toothpicks through the paper into the cake. Then just carve around the paper!

In order to give the cake a lift effect, I purchased a piece of foam board at my local cake store and cut it down to the exact size my car was going to be, with notches where the tires would be. I had my husband cut 5 small pieces of wood, the height I wanted the car to lift was about 1 inch maybe a little less, and attached them to the board where I would have my car. It helps if you trace the piece of foam board on your wooden board you are using to display the cake. The wood pieces should be placed one behind each wheel, and one dead center of the car. This way they are well hidden and the car looks like it’s lifted! Frosting is good old buttercream icing colored orange.

I needed the cake to serve a lot of guests, so I also baked a rectangular cake which was also colored orange, and wrote on it “YEEHAW! Tony is 40!” The car itself will feed about 25. 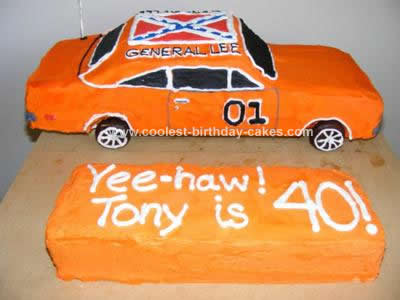