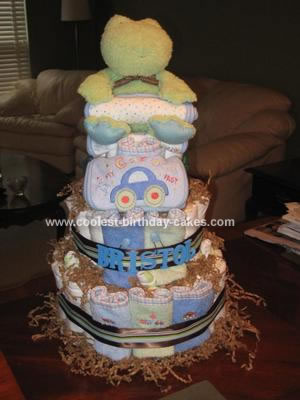 I began this Diaper Cake by rolling about 98 size 2 diapers. Start rolling at the open end of the diaper so that you have a clean end when rolled up. The fold in the middle of the diaper will be on the outside of each roll. Wrap a rubber band around each roll. I put one rolled diaper in the middle and placed other rolled diapers in a circle around it until no more would fit.

Then wrapped all of them with one rubber band. I did the same thing again around those. That created the bottom layer. Do the same thing for each layer, but leaving the outside ring of diapers off every time so that each layer is smaller than the one below it.

I pushed 2 wooden dowels up through the bottom layer all the way to the top layer to hold the layers together. I then folded baby washcloths and stuck them behind the outside rubber bands to hold them in place. Next, I hot-glued the striped ribbon to the brown ribbon and wrapped around each layer to cover the rubber bands.

I found wooden letters and painted them blue to match the ribbon and hot-glued them to the ribbon on the middle layer. After that, I hot-glued brown crinkled paper around the edge of cake board and then placed the diaper cake on the board. You can also stuff a few pieces of crinkle paper on the other layers.

I straight pinned the stuffed animal to the top layer of diapers. I put a few other small baby toys behind the rubber bands on each layer.