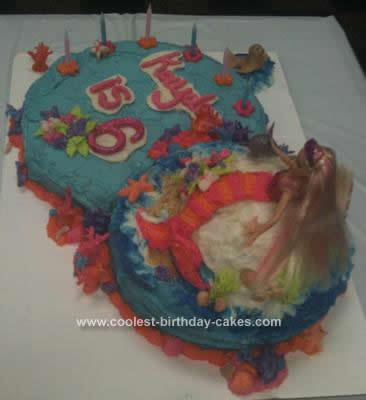 My nieces’ 6th birthday was coming up and she absolutely loved the movie Barbie in a Mermaid Tale. So I made sure to give her the best Barbie Mermaid Birthday Cake I could make. I normally use fondant but I decided to try modeling chocolate for this cake.

A few days before the party I made the butter cream icing and the different characters and props out of modeling chocolate. I got a simple recipe and made all the colors I wanted to use such as purple, pink, blue, orange. I then made my dolphin and seal then the coral and sea shells. I just made everything from hand and a butter knife.

For this cake she wanted the real Barbie so I bought the mini set at Toys R Us to be proportioned with the cake. I baked a large round chocolate cake and two small chocolate cake. The final cake, I baked in a small mixing bowl for the rock.

You can tell I put the large cake down then the smaller ones next to it with the rock on top putting icing between the layers in a hot pink color. The contrast of hot pink icing looks so awesome next to chocolate cake and kids love it, as long as you use the no taste colors.

I made a thinner butter cream icing in the light blue for the water and put it all over the cake. White for the rock and waves I just used a tooth pick to blend the blue and white together. I put the Barbie in and decorated around her until I was read to do her tail. I just did what ever came to mind for the tail. I cut out my words ahead of time and placed them next. I then did borders and used some crushed graham crackers for the sand.

The coral, dolphin, seal, surfboard, shells, flowers and words were all chocolate which made the whole cake taste awesome. I just put what ever where I wanted after I started I just tried to make it super girlie and cute. The glitter I used was totally edible, it is called Disco Dust. I looked everywhere for this stuff and ordering it was my only option, it is great stuff it comes in a lot of colors and a little goes a long way. It totally made her cake look over the top and like the real Barbie, she loved it.