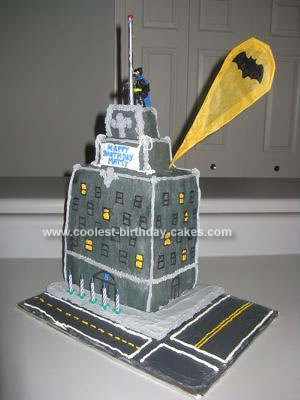 My son wanted a Batman birthday cake for his 5th birthday. I decided to make a Gotham City skyscraper and then put a Batman toy on top of the cake.

First I baked a half sheet cake, a 9″ square cake and an 8″ square cake. I cut the half sheet cake into equal quarters and then I cut two more pieces of the same size from the smaller cakes. I stacked 3 pieces on top of each other (frosting between the layers) on a very sturdy piece of cardboard.

I stacked them off to one corner of the board so that I could make sidewalks and streets on the rest of the board later. I put dowels down through the fist 3 layers to stabilize the cake. On top of the dowels, I put a piece of cardboard and then the other 3 layers of cake.

The cake was entirely chocolate, so my next step was to crumb coat the whole thing. After the crumb coat set up, I frosted the entire cake in a dark gray. I covered the dowel sticking out the top of the cake with fancy foil wrap and then put a red hot on the top to make it look like a blinking red light. I added embellishments to the building with light gray icing. I also frosted some cardboard pieces in light gray for sidewalks in front of the building.

I added streets in front of the sidewalk with black icing. I also used black icing to make windows and doors around the building, filling some windows in with yellow to make it look like lights were on. I used white icing to make it look like Batman had tied a happy birthday banner to the skyscraper. I stuck candle holders into the cardboard sidewalk in front of the building to look like decorative planters.

The address of the building is 5, the age my son was turning. I stuck Batman on top and secured him to the dowel with some tape. The final thing I added was the bat signal, which I made using floral wire wrapped with yellow tissue paper.

All-in-all it was really fun to make and even more fun to see my sweet little boy’s face the fist time he saw it. The dowel supports are a must- there is no way it would’ve stood for long without them.