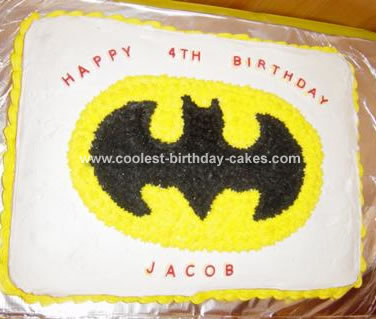 I made this Batman cake while living in Japan. Large character cakes are unheard of there, and we were having a big party for my Batman fanatic.

I made two 9×13 cakes, one vanilla and one chocolate and put them next to each other. I frosted the whole cake with white Wilton buttercream icing. I reserved a little bit, which I tinted yellow and black. My husband created the Batman symbol on paper, and then we traced it onto the cake using a toothpick. It is so simple to fill in images with a star tip, which is exactly what I did.

I then made a yellow shell border along the bottom with a 21 tip. I was a little nervous to write on the cake myself because my attempts in the past didn’t go so well. Later, I learned that in order to make the icing flow easily for writing, it must be thinned out a little bit with extra milk or water. Now I know, but a few years ago when I made this cake, I just had someone send me some candy letters from America.