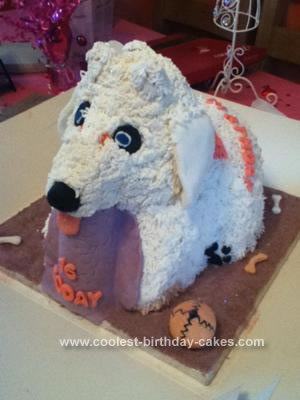 I made this cake for my daughter’s 16th Birthday as we bought her a Bichon Fries puppy and thought it would be a good theme as over the years you run out of ideals as to what to make.

I baked two 10in square sponge and a small pint pudding basin for the head. I used a 14in board and cut and jammed the sponge to shape. I also used two wooden doweling rods which I used to support the head inside as when you make a 3D Cake you need some stability to help it stand up as due to the weight of the icing it will fall apart.

When I had the shape I wanted I covered him in butter icing (the nose ,eyes, ears , tail I added later). Ready to then cover in white icing. I covered the cake over two days with fur like white icing I made with my garlic press. When covered I made his black nose, eyes, ears and a little tail.

For added detail I put a purple snuggle blanket in his mouth, also covered the board with colored sugar (white sugar and colored dust mixed together), a ball and a few small bones.

And there we have it, our Bichon Fries Puppy 16th Birthday Cake. She loved it and so did all her friends and also Buddy the new puppy. 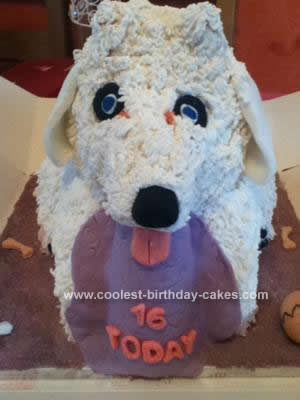 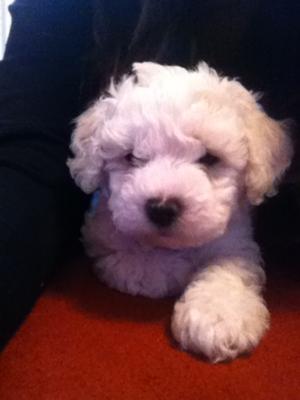