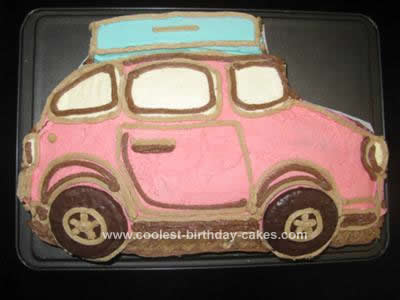 This is a Bon Voyage Car Cake I made for a friend who was moving to a different country. The cake is a moist chocolate cake baked in a rectangular pan (since I didn’t have a pan shaped like a car). To improvise, I merely sliced off the upper corners to create a silhouette of a car with a luggage on the roof.

To add effect and details, I further outlined the windows, drew a car door and fenders with the remaining dark brown icing using a fine star-shaped piping tip.