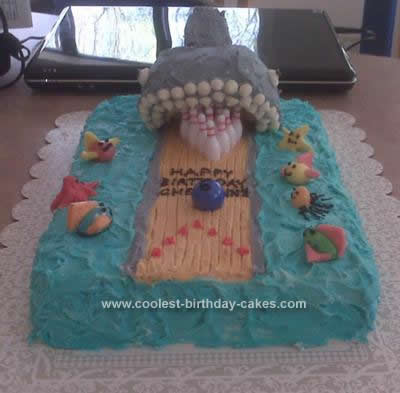 My daughter wanted a shark cake for her 6th birthday. She was having a bowling party, so I thought it would be fun to combine the two and make a Bowling Alley Shark Birthday Cake Design. I saw some other cakes on the internet that had a sharks head and those as inspiration.

I make a two layer 9×13 cake for the base. I baked 2 six inch round cakes and cut them in half and placed them side by side to make the sharks head. I trimmed a little off the bottom so it would site flat against the cake. I also cut out a little to on the inside so it would look like a mouth. I used one of the left over pieces to make the fin. I crumb coated it and covered the shark with gray homemade buttercream. I made the inside of the mouth red and added two rows of white chocolate chips as teeth.

I put a bowling lane on the cake and attached the shark with wood dowels. I found a miniture bowling set at the toy store and put the pins in the sharks mouth. The rest of the cake was frosted to look like water. The fish and jellyfish friends were made from nolded soft candies

The only issue with the cake is that the mouth needed to be hollow for the pins to fit inside, but it also took away some of the support, so eventually after a couple hours the sharks mouth started to close a little.

Everyone loved the cake, especially my daughter. 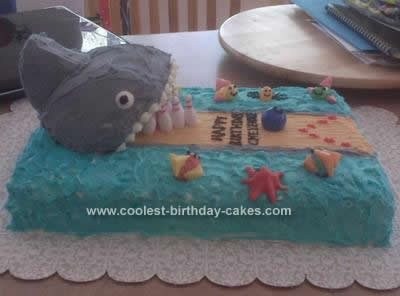