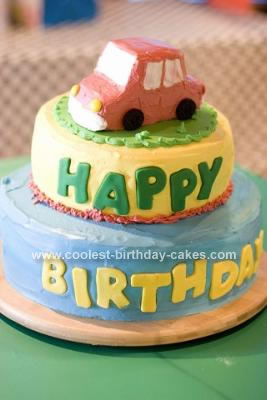 This homemade car birthday cake was the first cake I ever made- it was for my son’s first birthday, cars and trucks themed. In researching for this cake, I discovered this site and copied one I found almost exactly.

The base was made from two layers of 12” round cake, and the middle layer was two layers of 9” round. Each was made with one chocolate and one vanilla layer and the frosting was homemade buttercream. The car on top was my son’s ‘smash’ cake. It was marbled vanilla and chocolate baked in a bread pan, then cut, layered, and carved to form the shape of the car.

Decorations include M&Ms for the lights and mini Oreos for the tires. He had a ball digging his hands into it and eating fist fulls! Letters were cut with alphabet cookie cutters from store bought fondant, which I will never use again because it tasted horrible!

Aside from the fondant, the only change I would make would be to frost the car on top blue instead of red: 1. because I had to use a lot of gel coloring to make it that color and it still didn’t look like a pure red and 2. because red just isn’t a good color to have smeared around your face. It looked a little gross, like raw meat and blood – blue would have been way cute! I used a large Lazy Susan for the cake plate.

I’ve always had a love for baking but making this homemade car birthday cake made me realize my love of cake making. This was 2 years ago and since then I’ve greatly improved with lots of practice. I’m the cake maker of the family now and this is my absolute favorite site to look at for fun and inspiration. 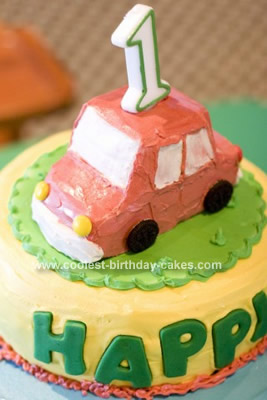