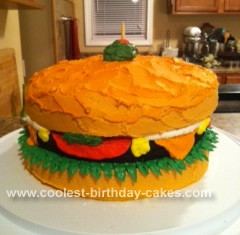 I made this Cheeseburger Birthday Cake to celebrate my 36th birthday. I used three 9 inch cake pans. I used yellow cake for the “bun” and chocolate for the “burger”. As with all cakes I make, everything is made from buttercream frosting. First I frosted the bottom bun. Next I placed the chocolate cake on top. I added the lettuce with the leaf tip. I then added the tomatoes & cheese.

o make the cheese and tomatoes flat, I covered my finger with powdered sugar and then tapped the frosting flat. Added the top bun and frosted it. I added extra frosting so that it had the appearance of a top bun. I added the white onion, pickles & yellow mustard. I then thought it was missing something so I created the green olive on top with a toothpick. The toothpick is actually an old chopstick that I had in the house. It was a HUGE hit at work!