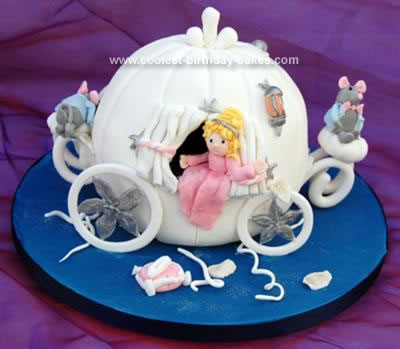 This Cinderella carriage cake was made for a Charity fete last year which supports children with terminal or degenerative illnesses. It’s called “The Rainbow Children’s Trust”.

I was approached by the organizer of the event, who asked if I would donate one of my “party cakes”. These are simply Victoria Sponges or coffee cakes – not birthday cakes. As they are such a worthwhile charity (as indeed, they all are) I decided to make them the Cinderella Carriage.

They e-mailed me after the event and said that they had used it in the Raffle and that they had doubled their raffle ticket sales! I was totally over the moon by this. They have come back to me this year and asked for another cake!