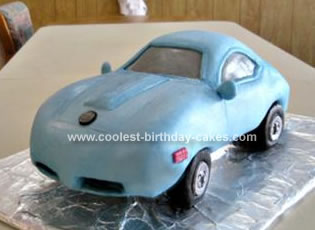 This Corvette car cake was for a man who owns a 1974 Corvette that he displays in car shows. I layered a 3-stack chocolate cake, putting icing in between each layer, then froze it. After it was frozen I carved the body shape, then covered it with chocolate, buttercream.

I made rolled (marshmallow) fondant, divided it into three batches, colored one blue, one grey, one black. I covered the cab with the grey, then covered the body with blue. I cut out the blue to uncover the windows. The tires were made of cookies covered in rolled fondant. I made the hubs with the same grey fondant painted silver with edible paint.

When it was done, I brushed the windows with a wet paint brush so they would dry shiny.