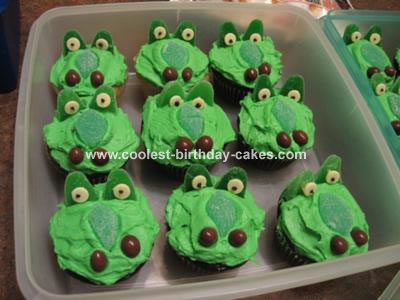 My son turned 1 in July and we decided to have a crocodile theme. I made a crocodile cake but knew that it wouldn’t be near large enough to feed the crowd at our huge family celebration. So I came up with these crocodile cupcakes which in hindsight was a great idea so we didn’t have to fuss with forks and plates, etc.

I adapted the cupcake design from a froggy cupcake I had seen online. I iced the cupcake green and then simply decorated with candy (who doesn’t like candy topped cake?!).

The eyes were a gumdrop cut in half. I pushed the pointy end of a white chocolate chip in the sticky flat half and placed 2 on the cupcake as I eyes. I put a dot of black icing in the centre of the chocolate chip as a pupil. The scaly snout was a gummy spearmint leaf and the nostrils were chocolate covered peanuts.

They were easy, fun and an absolute hit with the kids and adults alike!