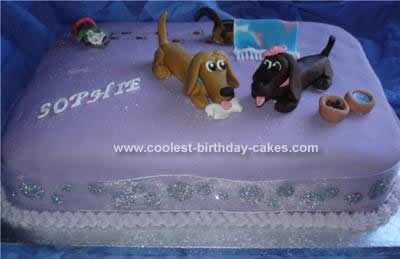 This Homemade Dachshund Dog Birthday Cake was a 14″x10″ chocolate sponge filled with chocolate butter icing and coated in chocolate fudge frosting followed by a covering of fondant coloured using grape food colouring. The cake was given the obligatory! dusting with edible glitter!

The dogs and dog bowls, broken flower pot and bone are better made a few days in advance to give them chance to dry out. I used coloured fondant mixed in some Tylo-powder to help it dry more solid (you could use Mexican paste or flower paste if you don’t have Tylo-powder. The dogs are simple to mould even if they look complicated. Start my moulding the icing into a long-ish sausage shape for the body, take 2 similar size balls of icing and roll into a small sausage shape but then indent in the middle to give a sort of bone shape, one end mould into a paw and use the back of a knife to score the ‘toes’, with the other end place on it’s side and press if flat-ish to make the hip shape. Using edible glue stick to the back of the body, repeat this for the front paws.

I used a short piece of cocktail/kebab stick to stick into the front of the body to use as an extra bit of support for the head also I pressed the end of a brush into the back end of the body in which I glued a tail. To make a collar just cut out a circle of coloured icing and thread down over stick and use a bit of edible glue to stick. To make the head take a ball of icing and mould it into a pear-shape thread down over stick and glue onto collar. Cut a smile into muzzle and if you want to add a tongue pull down the mouth slightly and glue in a small tongue. Eyes are simply round shapes glued into place, don’t forget to add white flecks for reflection (it definitely adds character!). Eyebrows are added and finally the ears are small pear-shapes of icing flattened out and stuck on the top of the head.

The bowls are easy to mould and fill the food bowl with small balls of dark brown icing glued in place and for the water bowl place a round blue icing disc. Make a flower pot, and bone using bits of white, green, red and brown fondant. When dry I placed the dogs on top of the cake using a little royal icing to stick in place. To make the rug that the ‘naughty’ puppy is hiding under I just rolled some pink, blue and white fondant together, placed it over the puppy and used royal icing to pipe the tassled ends. I used an edible food pen to draw paw prints leading from the pot to the ‘culprit’

Loved making this cake and it was easy to make the dogs, and can be adapted to make all different sorts not just dachshunds. 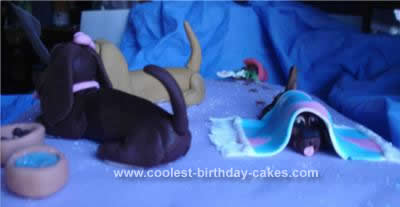