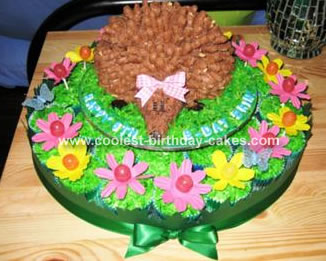 This hedgehog cake is a cake I was asked to make for Erin’s birthday party after making her a little Eve cake on her actual birthday. I asked Erin what she wanted and she said a cute girl hedgehog and cupcakes. No surprise seeing as we’d been to Alma Park Zoo and had seen a little echidna having his lunch.

I decided to display the cakes on a 2 tiered cake stand, with the hedgehog on the top tier standing above the bottom tier garden. This was also so that the little party goers could have cupcakes which would be easy to pass out and wouldn’t require sharp knives for cutting and lots of plates to put slices on.

I bought 1 small and 1 large cake base plus a pack of pillars from spotlight. I glued the pillars to the middle of the large base then cut a grass boarder from 2 rectangles of green cardboard and glued it around the outside of the base. This was not only for decoration but also to hold the cupcakes in and stop them from sliding off the base while being transported and on display. I finished the grass off with a length of ribbon which i tied in a bow and glued into place.

I lined a 2 x 12 cup muffin tins with green cupcake cases. I love Betty Crocker vanilla cake so made up 1 box of it, then divided into 3 separate bowls and dyed pink, blue and green. I put a single colour into each case and baked. While waiting for the cup cakes I made up another B.C. Vanilla cake mix which I divided into 2 bowls before adding a big dollop of Betty Crocker Chocolate Icing to one of the bowls to make it choc flavor.

To make the hedgehog shape I was going to buy a pudding tin to bake it in but forgot to buy it and ended up using a glass bowl that I had instead. Poured in the vanilla mix, topped it with the chocolate mix and swirled with a knife. Glass bowl not the best idea cause it took a lot longer to cook and looked a bit weird but was still okay.

After cooking the cupcakes and allowing them to cool I iced them with B.C. Vanilla icing that I’d coloured green, spooned into a ziplock bag and squeezed on. I topped the icing with moist shredded coconut flakes that i’d put in a large ziplock bag with green colouring and shaken til evenly dyed. The night before I had made the flowers, which were unwrapped mini chuppa chups with small cupcake cases (cut into flower shapes) sticky taped to the lollypop stick. I put the iced cupcakes on the large base then stuck the flowers in the cakes around the outside.

For the hedgehog I cut the cooled cake so the body tapered down into the little head. I then iced it with B.C. Chocolate icing while on the chopping board. After icing i lifted it onto the small cake base. For the spikes i had intended to use cut up Cadbury flake bars but it would’ve been too expensive so i got chocolate finger biscuits instead. I tried using whole biscuits starting around the head but they were too large and heavy and ended up decapitating the poor little hedgie!!!

I used a sharp knife to cut the sticks in half then again length ways which were much better to work with. Starting at the hedgehogs bottom i pushed the sticks in the body working my way around to the head. I repeated this over and over making sure the stick were pushed into the cake and also being supported but the sticks underneath them. I was a bit too heavy handed with the bottom cause when i reached the top i ran out of sticks and stuck the remaining bits haphazardly about the place. To cover the bare patches of icing i grated chocolate on top which was the perfect camouflage.

Licorice was cut into feet, nostrils and eye shapes then glued on with choc icing. The same was done for the ribbon bow on its head. More green icing was squeezed around the hedgehog then more green coconut was pressed into it. Finished it off with sugar lettering that I’d bought at the supermarket.

The hedgehog on its base was lifted onto the pillars. I didn’t glue it down because it was heavy enough not to slide around and I also wanted to be able to lift it off when it was time to hand out cupcakes. To make it look more like a garden I stuck 2 butterflies on wire in a cupcake on either side of the hedgehog. Candles were added later and were stuck in cupcakes around the outside.

This hedgehog cake took awhile to make but everyone was very pleased with the results. One word of advice – the biscuit spikes go soggy after awhile so eat them first!