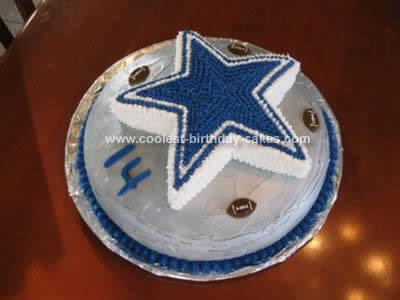 To get the white line in the star as precise as possible, I used the template of the star and a toothpick to trace the lines in the first layer of crumb-cover icing. I used a 16 star tip to decorate the star (did the white line first and then the blue). Before decorating the sides of the star, I placed the star onto the base and then decorated the sides white with the same 16 tip. I used a 21 star tip for the blue stars at the base of the cake.

The most challenging part of the cake was mixing the navy blue color for the star. I tried multiple colors and it eventually turned out great. Ultimately I think it was some combination of Wilton royal blue, black and violet. If I had more time I would have ordered Americolor navy over the internet, because I could not find it at the store.

The Homemade Dallas Cowboys Star Football Cake was for my 14 year old nephew. It was a pretty big cake and was made out of just under 3 cake mixes. 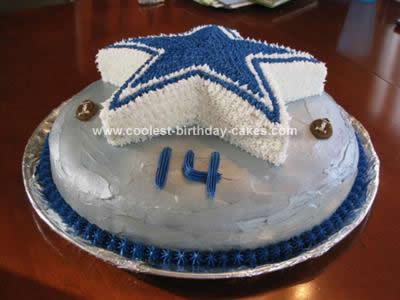