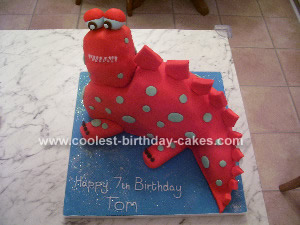 I made this Dinosaur Cake Idea for my friend’s son Thomas` 7th birthday. He loves dinosaurs!

First I covered an 11 inch square cake board with blue sugar paste and used some disco orange glitter dust for sparkle.

This is an 8 inch Victoria sponge with jam and butter cream. I sliced the cake in half to make a semi circle and put the straight bit on the board so the curve makes the curve of the dinosaurs back, then I cut the remaining half into half again use one half to make the tail and the other half cut onto a sphere for a head. I glued the tail to the body using some butter cream and covered it with red sugar paste. This was very tricky and it did crack in a few places.

Then I covered the head with matching sugar paste and fixed to the body using cake dowels. I made free hand spikes in descending sizes from red sugar paste and glued them onto his back using sugar glue.

For eyes I used 1 ball red paste and 1 ball white paste each chopped in half and stuck back together with the other colour i.e red halves at top, white halves at bottom. For the pupils I made a black circle with a small white circle on and glued them onto the white bits on the bottom half of the eyes then attached the eyes to the head dowels and a small amount of royal icing just to keep them still.

For his legs I used 4 large sausage shaped pieces of red sugar paste and made claws with black sugar paste rolled into cones and glued on with sugar glue. Then I made some spots of various sizes using holly green colouring and stuck them over the dinosaur for extra effect but also to hide the few cracks I accidentally made whilst covering the body. Then I iced some small triangles to make teeth on his face

Lastly I iced the message using royal icing. Hope you like it.

Coolest Triceratops from Harry and the Dinosaurs Birthday Cake