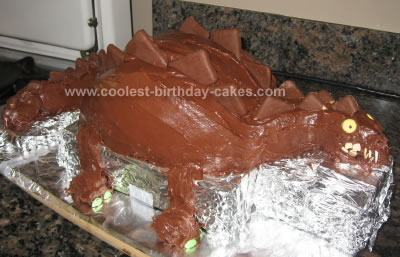 After viewing this website, I got the idea to make a homemade dinosaur Stegosaurus cake for my son’s “dino” birthday party. I made two cakes. One was baked in two 9-inch rounds and the other a 9X13. The rounds were cut in half slightly off center. On the slightly bigger halves I horizontally sliced off a sliver from the top to make them flat.

I built the body first. Working on a piece of foil, I stood them up on their ends back to back. I then took the smaller halves, put them on end and nestled them against the taller sides, securing all four halves with bamboo skewers. I decided that the dino really needed legs, so I took a kids size shoe box and horizontally cut it in half and covered it in foil. I then carefully lifted the body on foil and placed it on the box.

Next I built the platforms for the head and tail using small boxes and tape and covered them in foil. I then carved a head and neck and a tail from the 9X13. Then I frosted the whole cake. For the legs, I simply made them from frosting and then made the feet with a small piece of cake covered in frosting.

I used the chocolate graham cookies that someone else suggested for the spikes on the Stegosaurus and then I used yellow M&M’s for the eyes with a dot of chocolate frosting for the pupils. I also added some bamboo toothpicks for the teeth and cut M&M’s for the toenails.

The most difficult part was trying to frost the tips of the tail and head as the cake wanted to crumble so I had to be very careful and scrape the frosting from one knife to another to dab it on. The construction took awhile but it was well worth it. It was fun to hear everyone enjoy my homemade dinosaur Stegosaurus cake.