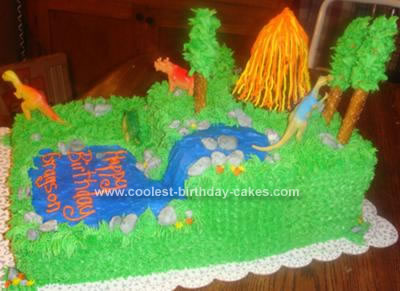 This Dinosaur Theme Cake Idea was for my best friend’s son who was turning 5. He loves dinosaurs and volcanoes. I suggested some of the cool dinosaur cakes from this site, but he insisted he wanted a volcano in there. So I started with a big sheet cake pan( probably a 12″x18″ or so) then made another thick square cake for the top.

I think the whole cake came to about 5 or 6 cake mixes. I did the waterfall/lake thing first. I put some globs of blue tinted icing on the cake and spread it loosely. Then I used a hairdryer to make it melt and fall right. This also gives it a shiny tint. Then lots of grass using a grass tip all over the cake. Drop flowers on the side. The rocks are tinted fondant. The volcano is just

some circle shapes stacked up with a dowel through them (could also probably use some cupcakes).

I used pretzel sticks for the trees with icing on them. Finish the volcano with orange and yellow icing for the eruption and place the toy dinosaurs around the cake. The cake came out really nice, but also heavy. Of course we had to put it on a piece of plywood to support it to take it to the party.

Overall, the kids loved it. Of course they liked the pretzel trees the most, so if I ever make another one, there will be a forest on it!! 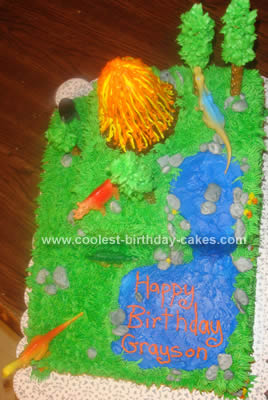 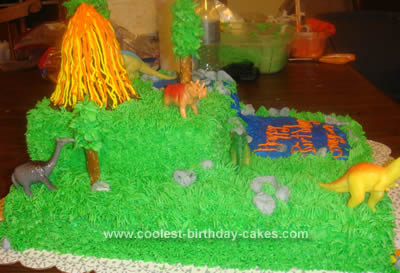