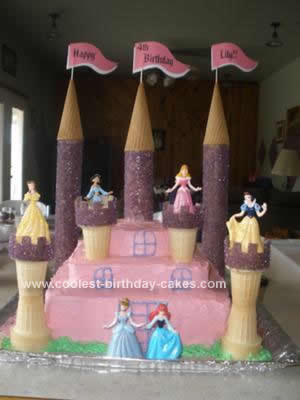 For my daughter’s 4th birthday we did a princess theme. Being that it is VERY popular I was looking for ideas for a Disney Princess Castle Cake. I found several good ideas on this website and with that knowledge and my own ideas this is what I came up with.

The cakes are just out of box cake mixes. Bottom layer is 2 10inch square cakes. Middle is one 8inch square cake. The top is a small (maybe 6 inch) round cake. Assembling the cakes were easy.

I used strawberry flavored frosting out of a can so I wouldn’t have to color it. The smaller towers are regular ice cream cones – 2 stuck end to end on both sides of the cake and then 2 singles on the 8 inch cake. The back 2 tall towers and the middle one (with the turrets) are made from paper towel and toilet paper rolls.

The most EASY part of the towers were that I used Karo light corn syrup as the “glue”. I used a pasty brush and just brushed a thin layer on the paper then I rolled them in the purple sparkle sprinkles! It was SO easy. They dried pretty fast and held up SO well. I did all the towers a couple days before then baked the cakes on another day and assembled the day before and day of the party.

On the tops of the regular cones I used a template to make the “edge” and used the Karo and sprinkles on them as well. (I also used the Karo to glue the cones together). The tops of the purple towers are sugar cones and I just hot glued them on. I printed the birthday message on colored paper and used a flag stencil to cut it out and toothpicks to hold them on the tops of the cones. It was hard to poke a hole in the end of the cone without breaking it but that’s why I had 12 cones available!

I already had the princess figurines which is one reason I didn’t want to purchase the “kit” to make the Disney princess castle cake. I used a small bit of icing colored purple to make a few windows and a door and then green for some grass. Over all – I think this cake was pretty easy to make – the part of figuring out what to use was the hard part. I got tons of compliments on this cake and of course my daughter LOVED it!