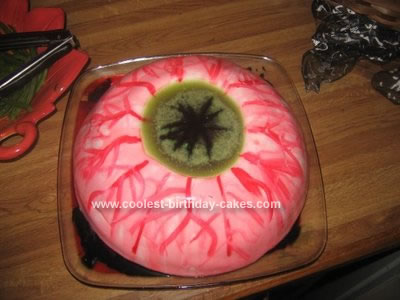 Every year we have a Halloween party, so this year I wanted to do something different for dessert. After looking at multiple websites I found an Eyeball Cake on here I thought would be fun.

I used a red velvet cake mix so it would look like blood after being cut. I baked the cake in a large glass mixing bowl for approximately one hour until done in center. Once cooled I cut out a center hole about half the depth of the cake for the iris and pupil area. I then covered the entire cake with buttercream and white fondant making sure I formed it into the cut hole.

I poured green jello that had not set into the hole area and refrigerated it until almost set. I then used a toothpick and mixed all the food coloring liquid together to make a dark color(almost black). I used the color and toothpick to pull through the jello to make the pupil and lines in the iris. I then used red jello and poured it over the entire cake and used red food coloring to make the veins. I used a decorating brush for this.

I then used some more of the dark color liquid to make the “Blood” in the dish darker. I returned the entire cake to the refrigerator to set for several hours. This cake was a huge hit at the party. When we cut it, the jello oozed out and the red velvet gave it a nice gross look, but was tasty.