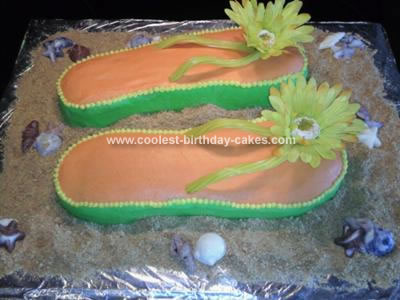 I found the recipe for this Flip Flop Luau Cake on Betty Crocker but modified it a bit. They had a handy template that you print out so that your flip flop cake is just the perfect size. I’ve done some cake decorating in the past but my experience is minimal. I really wanted to try fondant, but since I’ve never done it, I wasn’t going to risk trying this for my grandpa’s 80th birthday (luau themed) party.

I made a white cake according to the directions, used the template and cut out the cake. I doubled the recipe for Wilton’s buttercream frosting (do not, and I repeat do not use store bought icing/frosting – it WON’T work) and colored it with Wilton’s coloring. I smoothed out the icing as best I could by hand then used a non-patterned dry paper towel, lightly placed over the cake and smoothed it very gently with my hand. The effect is very, very smooth, almost fondant like icing as you can see by the picture.

I did the sides of the cake first and overlapped on to the top of the cake. I then did the top and finally the dot border. For the flip flop straps I was so lucky to find fruit flavored Twizzlers that come a variety of fun, bright colors. I used my same dot tip and shot some in each Twizzler end and inserted a toothpick. I made a “v” with the Twizzler then took a silk flower, inserted a toothpick in the stem and stuck it through the middle of the “v”.

The other additions were the “sand” which is made of ground up graham crackers and the seashells which I used vanilla almond bark and chocolate chips. I melted and just experimented with mixing the two colors. I also used some black Wilton’s coloring and swirled it in with the vanilla for the gray color. Then I spooned it into the seashell candy molds (found for $2 at local craft store)and put in the freezer for about 30 minutes.

Got TONS of compliments on the cake and many people asked if I made it!