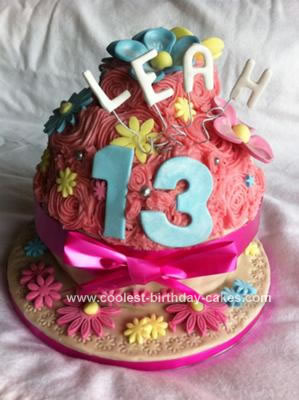 Set oven on gas 3. Mix all ingredients together in a large mixing bowl, until well mixed then put on high speed for about 5 minutes.

Leave in the mold for about 5-10 mins. then turn out on a cooling tray. Meanwhile while the cake is cooling make some flowers with different colored icing and set these aside to dry out. The icing for the bottom was colored in a light brown.

When the cake is cold, cut the ends off the two parts of the cup cake so later they can be sandwiched together. Cover the base of the cake in butter cream and place in the fridge to chill. When chilled cover with the light brown icing making sure there’s enough to cover the cake board. I then (using a flower cutter) slightly pressed a flower pattern all around the edge of the cake board. I then spread some jam on the base of the top half of the cake and sandwich together. Then I colored some butter cream icing in pink, and piped swirls all over the top half of the cake.

When the flowers were dry I arranged them on the cake. I then cut out a 1 and a 3 and attached these to the cake. I also attached a ribbon. Finally I twisted some florist wires around a pen to make spirals on the wires and attached some letters spelling out a name these were made with flowers paste and laid flat until hardened. I then taped them together and placed in a plastic posy holder and pushed into the cake and arranged them.

Finally I arranged a pattern of cut out flower shapes around the base of the cake. 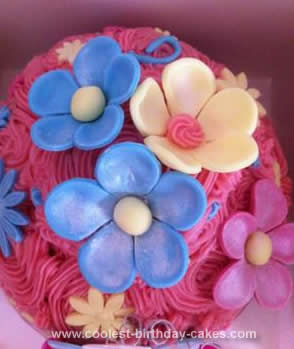