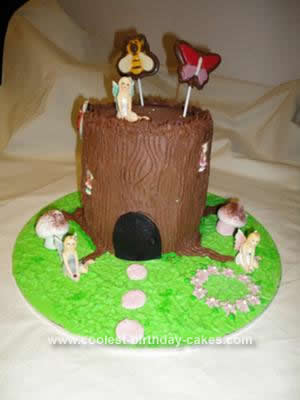 I made this Homemade Fairy Garden Birthday Cake using a plain vanilla sponge mix and then divided it into 3 batches and made 1 strawberry and 1 chocolate. I cooked them in separate round pans then when baked layered them on top of each other with a chocolate buttercream in between each one.

I cut out 2 little holes on each sides for little windows. I then covered the ‘log’ in chocolate buttercream icing and white icing in the windows. To achieve the tree look I used a fork and gently scraped it and made sure I did the knot bits occasionally.

I used a piece of fondant in black as the door, marshmallows for the toadstools and homemade chocolate lollipops as the insects. I also used green buttercream icing as the grass and used more of the chocolate buttercream to put tree roots over it. The stepping stones was a marshmallow cut horizontally in 3, the fairies are ornaments and the fairy flower ring was used with the star tip and buttercream icing. I also sprinkled edible glitter all over it to give it more of a fantasy/sparkle look. 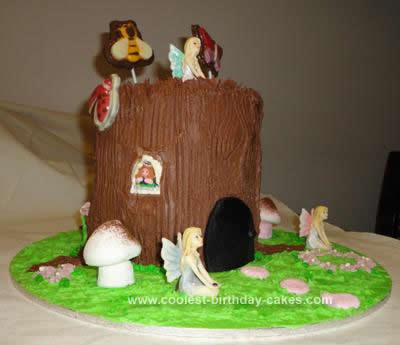