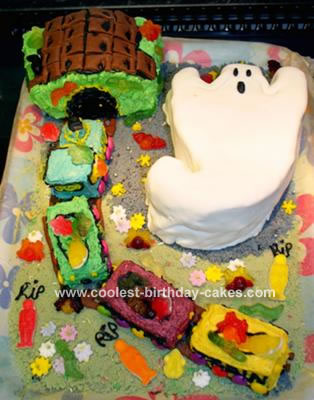 I made this ghost train cake for my son’s school Halloween party.

I made 2 large rectangle cakes, the 1st one was cut in half and placed on top of each other, then carved out the shape of a ghost. The left over cake from this was used to make the Haunted Tunnel.

The 2nd cake was cut in to 6 to make the train.

I covered a tray with coloured sugar and used curly whurly as the train track and the roof of the tunnel.

I then carved out the inside of the ghost and filled it with Chocolate to make a shell, this was then filled with red jelly and green butter icing and jelly worms,and skeletons.The ghost was then covered with Royal icing.

The trains were carved out and covered with butter icing and filled with the same jelly worms etc, and smarties as the wheels.

The kids loved the fact that it sounded like the ghost cracked when we cut it open and all the insides came flooding out of it. I hope you like the cake.