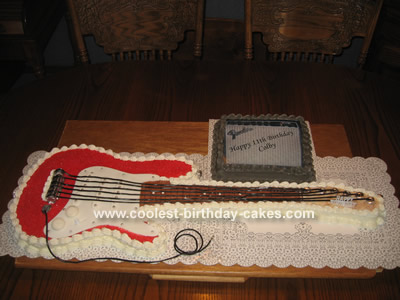 For my grandson’s 11th birthday I decided to make a guitar cake as he is taking lessons and enjoys it so much. When he wasn’t home I took a picture of his guitar and amplifier, and traced the guitar on paper that I had taped together to make it long enough. I wanted to make the cake look like his guitar.

I cut out the drawing and placed it on the cake as a pattern for cutting the guitar shape. I made a big cake in a large pan with 2 boxes of white cake. I made a 9X13 marble cake for the amplifier, and cut about 2 inches off of the length. The neck and end of the guitar was spice/carrot cake. I used a large plastic baggie, so that I could see through it to trace the white top on the guitar for a pattern to cut the fondant. I put the cake pieces together and crumb frosted the cake.

To make the little knobs I needed, I covered Junior Mints with foil and stuck a tooth pick in the side to attach to the cake. The little round multi-colored dots you can buy in the cake section at the grocery store is what I used for the white dots under the strings. You can make lines under the strings, by using a knife to mark it. You could pipe the lines on yourself, use sucker sticks or string licorice. ( Tom’s Farms had several colors) I wanted very thin lines You could use dental floss to make the lines also. I used silver twist ties, but you have to take them off before you cut the cake, which was very easy to do. (I found the licorice at Tom’s Farms in Corona CA)

I used black shoestring licorice for the strings. The shoestring licorice is the only licorice long enough for a life size guitar. I used a licorice stick for the handle on the amplifier. I used my computer to write the Happy 11th Birthday Colby across the front of the amplifier before I printed the picture. To put the picture on the cake, I laminated it first and then frosted the cake topping it with the larger decorative white sugar. You have to use enough so that the picture won’t pick up the frosting on the cake, when you remove the picture.

I also covered life savers with foil to make the place for the licorice string to go through and into the cake. I attached the licorice strings to a roll of life savers, with hot glue at the ends. The knobs on the white face of the cake are water bottle tops with white frosting on the inside. The white face of the cake is fondant (I frosted the cake underneath), and I used the largest silver dragees I could find (at Pila’s Pantry in Norco CA) for the little screws that attached that piece to the guitar. I use a pointed shaped cap from a Melt To Use Candy Writer for the little lever that moves on the front of the guitar. I poked little holes in the fondant and pushed in the dragess, just a little, where I needed them.

I used the red sugar sprinkles to make the shiny red face of the guitar. I found a little silver cowboy hat at Pila’s Pantry and turned it upside down to make the place for the amp cord. (licorice string) I hot glued the licorice to the inside of the hat. I probably could have used frosting. On the other end of the licorice amp cord I used a silver twist tie. I take anything off the cake that is not edible before I cut the cake.

I used paper towel around the cake to keep the red sprinkles from getting on the cake board. You can tear pieces easily to fit around it. After removing the paper towel pieces carefully, I put the borders on the cake. I made sure I removed any sugar that would keep the top border from sticking to the top of the cake. You can use a small knife to scrap off the sugar on the top edge of the cake. I also used cinnamon and sugar to look like the wood part at the top end of the cake. This was really a fun cake to make.