My son was turning 21 last month and I had always made him a birthday cake when he was young. I hadn’t made him one for a few years (except a suitcase cake when he turned 18 as a joke, because I always joked with him that he had to leave home when he turned 18) He loves music and plays the guitar and asked me the day before his birthday if I was going to make him a guitar cake, since I had made one for his Dad when he turned 50. It was a replica of a guitar he owned. I said, “Yeah right Dylan. Like I have had time to do that, along with organizing your party. And besides that, you don’t own a guitar!”

That put him off the trail because unbeknownst to him I was making a cake and we had another surprise for him!

I always loved making cakes for my children when they were little. I loved to see the look on their faces when the cake came out and it was whatever their favorite character was at the time. They loved it no matter how bad I thought it was! I think a Thomas the tank engine cake I made him when he was 2 was the worst!  Thomas’s face looked like it had run into the back of a bus. Even still, all the kids loved it.

This 21st birthday cake was a huge challenge for me. I had to make it look like a real guitar! We had bought him a guitar for his birthday. I traced around it to get the shape for the cake. Then, I took lots of photos of it from different angles because my husband needed to take the guitar to his work to hide it. So, the cake making began!

I made all the hardware for the cake at night through the week. Luckily Dylan doesn’t live at home, but he visits quite often so every time I heard a car I would panic and think it might be him! Thankfully, I managed to get it all done without him catching me!

I baked two large chocolate mud cakes and that was just enough to make the guitar. The shaping took me the longest to do because I wanted it to look just right. I covered the whole cake in chocolate glaze and shaped it when it had hardened. I was a little disappointed with the colour of the icing. I had gone by the photos because I didn’t have the guitar and it turned out to be a little lighter in colour, but nobody but me seemed to notice (I am always my worst critic).

The day of the party was quite hectic, but I got the cake finished just in time. I like to always try to have everything edible on a cake, but this time I couldn’t think of a way to do the strings, so they were dental floss, which made it easy because I threaded it through the pick ups and tuning keys to keep it tight. Besides, if anyone got cake stuck in there teeth we had the solution right there. LOL.

When it came time at the party to present the cake, we carried it out and Dylan was speechless. I said, “Since you don’t have your own guitar for me to copy I got some pictures of guitars off the internet and thought this one looked cool. It’s a Zac Whilde Signature guitar. Is that a cool guitar?”

He replied, “Mum, I know what it is and yes, that is a very cool guitar!”  He couldn’t believe it and all his friends were also speechless! (Best reaction for the cakemaker!)

Next, I said I would go and get him a knife to cut it with. My husband and I then went and got the real guitar and presented it to him and said we couldn’t find a knife, but here is your new axe. Apparently that’s another name for a guitar. I think I’m getting old because I didn’t know that.

The whole surprise went better than I expected. He didn’t want to cut his cake so I did it for him.

The reaction from a lot of people to a cake like this is “oh, it seems a shame to cut it.” To the cake maker though, I think it is sometimes the best bit seeing the cake being cut and then enjoyed by everyone! 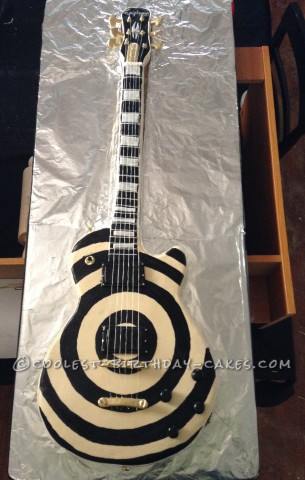 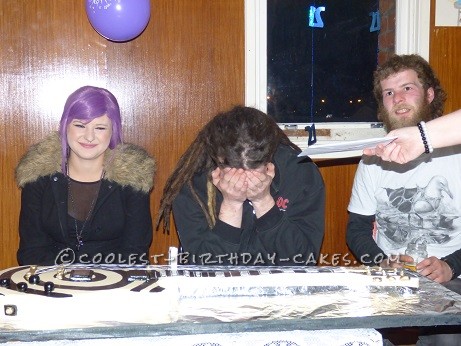 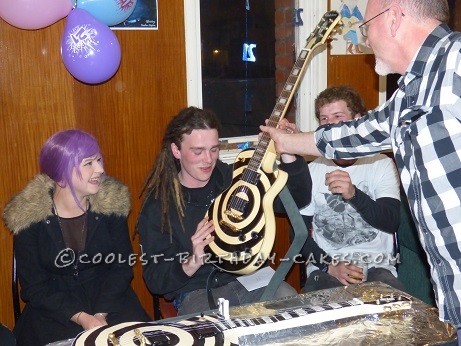 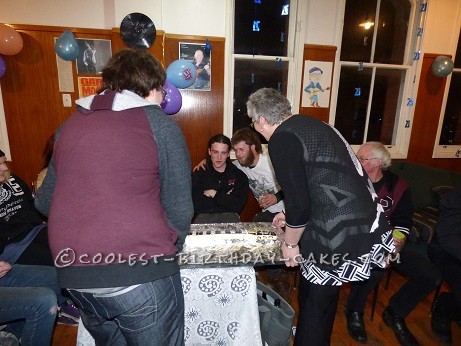