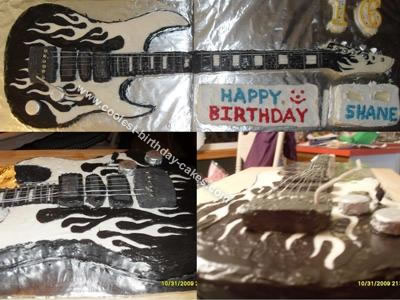 I have recently gotten into baking and decided to make a Homemade Guitar Birthday Cake for my son’s 16th birthday, modeled after the guitar that he was getting for his birthday. I went with a scratch white cake. They seem to be better to cut out when frozen compared to a box cake mix not to mention tastier.

Here are the details of how I made this cake. I printed out a picture of the guitar on an 11×17 paper and cut it into two pieces. Used a 12×18 sheet tray for the cake. It took two batches of the recipe for the guitar body and one batch for the neck. Froze the cake and laid the cut out paper guitar pieces onto it and cut them out. The neck I cut out twice from the thinner cake and just doubled it up. The other scrap pieces were used later. Put the scraps in the freezer.

I prepped cardboard slightly bigger than each of the cakes and covered them with foil. Place them onto the cardboard so that the two pieces could join together at the neck and form one large guitar. I used regular white icing from the can and completely covered it with a thin crumb coat of icing to seal the cake up and to form a nice icing base.

After freezing it put another layer of white icing all over. Cut the flames out from the template. Put the pieces in the freezer to keep the icing stiff. The piece not being worked on should be in the freezer. Lay the cut out flames onto the cake and press down a bit so that is sticks a little to the top coat of icing. Mix up a bowl of black icing using black food coloring. Add the black little by little until the desired shade. Apply the icing with a small icing spreader all along the edges of the flames and where ever black is desired on the top of the guitar.

Since the cake is cold, the black icing may set up a bit. I decided to take a hair drier and heat the icing up a bit before lifting the paper flame template so it would not tear or pull the icing up. Now the flames are white with the black body. Only the top was iced at this point, so the sides need to be done. Do the neck the same way for any parts that need to be white.

Mix up a light grey batch of icing to be used for the frets and detail on the pickups. Using a pastry bag and a small tip, add the frets. Take the thin scrap and form pickups and tremolo. Ice them black with a grey inner rectangle and glue to the body with some icing. Different thicknesses of dental floss were used for the strings. Determine where the strings will go on the tremolo and on the head.

Take a flat toothpick and split the fat end with a knife. Break the toothpick basically in half, and slip the floss into the crack. Insert the toothpick into the cake at the marked spots to anchor the string. Pull them slightly along the neck to the end where the two pieces will connect and allow it to hang over the end a half inch. Do this for the 6 strings positioning the fatter floss where the fatter strings of the guitar are suppose to be. Do the same with the neck. Use some kind of screws for where the toothpicks are inserted into the cake to make it look real.

Make tuning knobs out of cardboard cut out to the shape of your choice. Use two pieces for each knob. Tape together and cover with foil. Insert a toothpick into the bottom end of the knob and then insert into the neck by each screw. These will need to be broken in half also. Make knobs out of water bottle caps stuffed with tissue and cover with foil. Glue them to the body with icing. Create a tremolo arm with a pipe cleaner in your desired shape and insert into tremolo part of cake.

The strings will tend to get loose and wavy when the cake is moved around. Once it is where it will be presented, pull gently on the strings where they overhand the end with tweezers to taut them. Place the two cakes together and you have about a three foot guitar.

This whole process took about 17 hours. A chunk of the time was used figuring out how to do things without ruining anything.