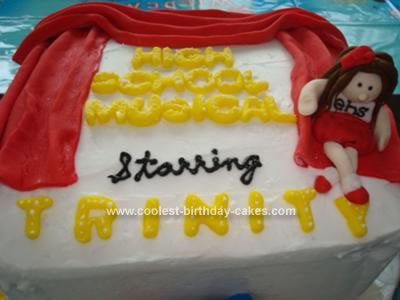 I searched the internet for ideas and decided to combine several ideas. I knew right off that the trademark High School Musical in yellow letter with white dots had to be the center. And obviously, red and white school colors. I saw a lot of High School Musical Birthday Cakes that I liked, but looked too complicated.

I baked a three layer 9 inch square cake. Covered it in white buttercream icing. The fondant characters I Googled were awesome looking, but I knew would be time consuming. So I decided on just my niece, but in a East High School cheer leading outfit. It was a lot easier than I expected. Molded her just like the fondant was a piece of clay. Kept the rest simple.

Star border with yellow sugar stars literally tossed at the sides. The red curtain made out of fondant. After flattening the fondant, I cut out rectangles and fan folded the fondant. Then slightly opened it back up and laid it on the cake. It stayed slightly folded enough to give that open curtain look. The top curtain was done in the same way except I pinched towards the ends to give it the look it needed.

I was happy how it turned out. Not over done with the high school musical theme and personalized enough that everyone knew she was the star for the day. 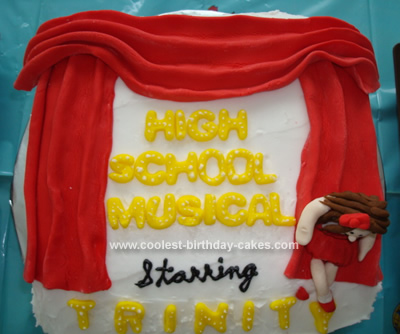