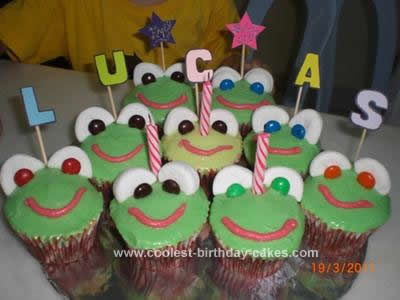 I like to bake but do not know how to decorate. I tried decorating for the first time when I made a pull-apart tortoise cake for my son’s 2nd birthday last year, and I must say it turned out quite nicely but the glaze icing was way to sweet (I had no idea about the types of icing!). This year he wanted Homemade Frog Birthday Cupcakes. I have seen some frog cupcakes online and they seem quite easy so I made him some.

I baked chocolate cupcakes using Pillsbury cake mix. I think the oven was too hot and the insides of the cupcakes spilled out like lava. I was quite dismayed that I had uneven surfaced cupcakes with one side higher than the other, but it ended well as the higher part was used as the ‘forehead’ and gave the frogs a nice rounded look. I tried buttercream icing this time (definitely better than glaze! less sweet!). The eyes are marshmallows cut into halves, with M&M chocolates for the pupils. Piped the pink mouths onto them, crooked but will do. I had a friend helping me with the icing, she was a lifesaver as I had limited time.

The cakes were personalized with my son’s name where I cut out the letters from coloured art paper and taped them on to toothpicks. I think this was a good idea coz if I had piped the letters it would have been quite crooked! Besides, this adds to the 3-D effects of the cakes along with the stars.

My son was thrilled to see the finished frogs, and I would definitely continue making my kids’ birthday cakes with love (for as long as they want me to! :p ) and brush up on my cake deco skills along the way!