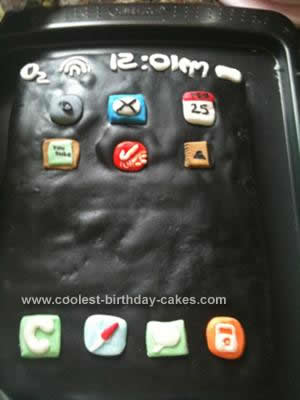 My dad’s 44th birthday was coming up and he is always glued to his iphone. So I got this idea for a Iphone Birthday Cake pretty quick. It didn’t take that long, 4 1/2 hours roughly. The apps took the longest time, as they were made from fondant, and most were painted with diluted Wilton gel icing {the others were made into solid colours and just shaped them). I wanted to do the apps he had on his phone, but they were very complex, and so I made a few of his, and the other ones were simple, apps that the Iphone always has. He loved it!

I started off by making a one-layer chocolate cake. When it cooled, I made the apps. I then covered the cake in vanilla buttercream and covered it in black fondant, {which I bought. I know its cheating but its so hard to make it really black!}. I simply stuck the apps onto the cake and rolled the time and O2 letters out for the top of the cake once I was done.

Looking back, I could’ve done better. I could’ve made the button and the speaker at the top – but for a first attempt I was very proud of myself.

I really think he liked it and he showed all his workmates – so it was very worth the work! I’d like to make this again, but it takes a lot of patience to do the apps!