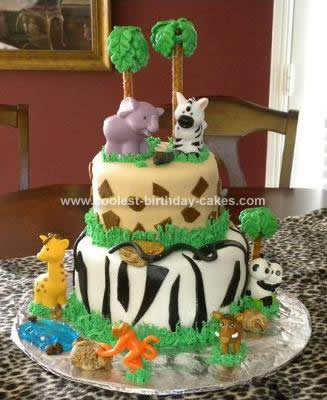 I made this Jungle Safari Birthday Cake for my son’s 4th birthday at his request for a jungle themed cake. I’m going to be detailed because I find that helpful when I’m looking at this site and want to recreate a cake I like.

This cake was made from 3 cake mixes. The 8″ (used Wilton round cake pan) bottom tier two full cake mixes with the bottom being a white cake, dyed so it was rainbow colored (six different colors on top of each other). The second layer went directly on top of this and was separated by a layer of chocolate fudge buttercream icing. The top tier was two strawberry 6″ cakes (one cake mix) which was separated by chocolate fudge buttercream. The two tiers were covered by marshmallow fondant (found on cake-journal.com). I love this recipe because it actually tastes good. It’s very messy but I love how easy it is to work with.

I covered the cakes in white (no dye needed) and a light beige color (used a tiny bit of Wilton brown food coloring). I abstractly cut out the shapes for the zebra and giraffe patterns in black and brown (also Wilton food dyes). I am not artistic at all so I was worried about how to do this but it was easy. It turns out that if you just cut abstract pieces using a pizza wheel, they tend to resemble the animal patterns, which are not perfectly shaped either. I piped green icing around the layers to create the “grass” by using the Wilton tip #233.

The palm trees were adorable and I made those from the tall pretzels. I put a large glump of green fondant on top and cut out the leaves with a Williams Sonoma pie crust cutter. I love these because they are textured already and the perfect size. If you look you will see the leaves were more sycamore shaped than palm, but it worked. I also made a few brown balls to resemble coconuts. I just layered the leaves and pressed them on. They are quite heavy so we had to put them on the cake and push them fairly far in to keep them from toppling and the on on the bottom was cut in half and a fondant “rock” held it in place

Rocks were all made out of fondant and the blue water was dyed blue piping gel that we just put on the edge. The animals were all from Fisher Price Noah’s Ark set and a few Diego toys. I had aspired to make these out of fondant but am 4 months pregnant, exhausted and was afraid of the stress that would cause me, as I am not artistic.

The cake was a huge hit. It was time-consuming but easy. Everyone at the party loved it, which makes it well-worth the effort.