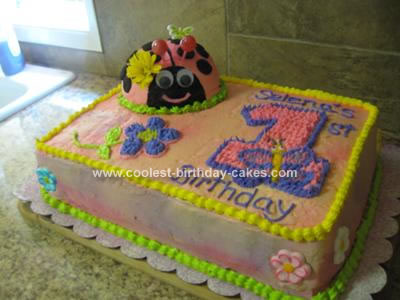 I am a beginner at cake decorating and have never used decorator tips so I learned as I went on this one. One thing that helped was that I drew my designs out on paper first and practiced piping on the paper before I decorated the real thing.

The ladybug on top of the cake is made by using a small mixing bowl as a cake pan. I saw this idea on the internet while looking for ideas. I decided on a Pink Ladybug because it was for my little daughter who turned 1 and I wanted everything to be bright pastels.

The antenna are simply Dum-dum lollipops, and the ladybug spots are mini Oreos. The eyeballs are not edible, as I could not find edible eyes big enough.

To support the weight of the ladybug, I used a tuna can wrapped in foil, placed it where the ladybug would sit, and traced around it to make a cutout. I then hollowed out that portion of the cake and sunk the tuna can inside, creating a “support pedestal” so the ladybug would not sink into the cake. The can must be the same height as the cake. I used two cans stacked because my cake was extra tall.

Frost over the top and then place the ladybug on. I’m sure there are other ways to support weight on a cake but I’m a beginner and I just used what I had handy in the house.

The flower and the number one on the homemade ladybug first birthday cake were ideas I found on party napkins on the internet. I used “electric pastels” because I liked the bright colors. This particular cake was huge… 11 by 15, 2 layers of white cake plus a double batch of Bavarian cream filling with buttercream frosting.