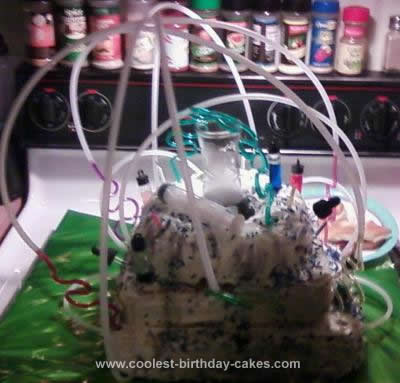 Please be kind I am no professional….This Mad Science Cake was an original idea for my oldest who at the age of ten decided he wanted me to make him a science cake that “did” something. Not knowing exactly what he wanted I drafted my idea from several thoughts into one big mad science cake. First I made the bottom layer out of the biggest size pan that I had, the second layer I added was a smaller rectangle pan. For the top layer I used a bundt cake pan for the purpose of having the hole in the top.

The cake itself was not difficult, the decorations just look elaborate. For the decorations I went a little crazy in Hobby Lobby lol…I got several little science kit accessories, as well as a pack of crazy straws, and some plain plastic tubing. I covered the cake in plain white icing from top to bottom, and I must admit guilt, I did not pay close attention to the detail and smoothing because I knew it was so busy you couldn’t even see the icing…shhh. After I added the the icing I took a assortment of blue sprinkles and covered the entire cake. After that I took the crazy straws and attached the plastic tubes to them to insert them from different angles to create the appeal of a science project. After the straws and tubes were placed I added the other pieces from science kits.

The overall idea was to create a science project cake. Oh my I almost forgot the part that “did” something. In the top layer where the hole was from the bundt cake pan I placed a glass beaker with water and food color (green) and just before lighting the candles I dropped in a piece of dry ice to fiz and smoke. Hope you enjoyed. It was a big hit. My big baby was absolutely radiating when he saw his cake. He told me it was just what he wanted!